The highway-bridge in the mountains has multi-storey turning lanes

China has given us Covid, cheap mobile phones and, more recently, competitive electric vehicles. Now, however, it gives us an example of monumental infrastructure designed. This is the highway-bridge in the mountains, which allows cars to turn around.

You can blame them for many, but you can’t help but marvel at the technical wonders out of the hands of the Chinese. In 2021, in Romania, the kilometer of highway on flat land pours slower than the bored snail goes. Meanwhile, in China, this is happening. 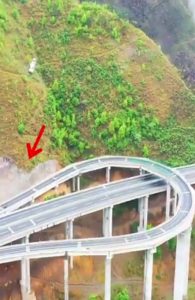 A highway through the mountains, with 3 lanes each (plus an emergency lane). And this is not all. If you entered by mistake, or realized that you forgot the open gas at home, or, for whatever reason, you want to return, you do not have to go all the way. There is a separate section built on top of the highway, which allows you to turn 180 degrees. We don’t know if there is a similar one for the other direction. There are probably other exits, as suggested by the arrows painted on the asphalt.

But its usefulness is not necessarily remarkable, but the technological level that allowed them this artifice, at such a height. Of course, in a communist country like China, it is difficult to wonder if the construction took tribute and lives. It is certain that, while we are not able to build the road in a straight line, on solid ground, they make multi-storey highways in the mountains.

In Guizhou, there is a high-speed turnaround in case you went the wrong way. Let’s take a look at it! pic.twitter.com/U4FQPb7wEY

The building is located in Guizhou Province. On the return belt, the speed limit is 40 km / h, for safety. Don’t tell Ken Block that!

Not only in China, however, there are impressive roads. We have made a ranking of the most dangerous roads in the world, which you can see here!

Audi RS Q8 will turn into a “killer” Lamborghini Urus