Test Ford Ranger Wildtrak: what is now hidden behind the console in the title

Perhaps the Ford Ranger is one of those pickups that I find myself driving more often than others. Only in the spring was a vivid test presentation of the Ranger Raptor, and now the updated Ranger arrived in time. What is the relationship between them? What’s the difference? Now I’ll tell you more!

As befits a multifunctional car, the Ford Ranger has many versions and modifications. And at the top are the most powerful and fastest. Until recently, this title remained with the Raptor modification, which we exclusively met in the spring of 2019. With a 213 hp turbodiesel engine Raptor at that time was what is called the most-most among his brothers. Of course, it differs not only in the engine, and this is the topic of a separate story:

And now in front of me is the updated Ford Ranger with the Wildtrak inscription on the door. And under the hood he has the same diesel power unit! Well, the more interesting it is to ride a pickup already on our roads, especially since the test places are just like picking up – even expensive and not bad, but without too much extreme off-road.

Black as a raven’s wing, the pickup looks very serious! Yes, and in solidity, rigor and “authority” on the road, he also can not refuse. Other participants in the movement also feel this, often not daring to rush or just giving way. Although you yourself are going as you go and do not expect anything from them.

And although restyling updates are less noticeable on black, let’s try to go through them. The designers concentrated their main efforts on the front of the car. Here, the updated radiator grille, made in dark color, the new head optics with LED sections, as well as the otherwise designed fog lamp sections, which received a black edging. And on the front wings are neat inserts with the inscription bi-turbo. Now we know for sure what lies behind them!

There were practically no changes in the cabin, but the Wildtrak version, like the top one, pampers the owner with a rich level of equipment. Leather interior with orange stitching and original accents, a multimedia system with navigation, Android Auto and Apple Car Play, dual-zone climate control, electronic driver assistance systems, among which I would particularly highlight lane retention.

And as an easy reminder of which particular Ford Ranger you are driving, there is the Wildtrak inscription on the glossy inserts of the front panel. The front seats are comfortable in their configuration and lateral support, in addition, they are equipped with electric adjustment. But the back sofa is, one might say, one of the Ranger’s pride! Because it offers real passenger comfort. It has a comfortable gentle back, plenty of room for legs and feet. And the ceiling above the head does not hang, so a person who is taller than my 1.82 will also work fine. Moreover, despite the molding, the sofa cushion is soft along the entire length, so that the average passenger will be comfortable. I will not exaggerate if I say that in terms of these indicators Ranger will give odds to many competitors.

The pickup body has dimensions 1.5 to 1.5 meters, and its floor and walls are protected by a durable plastic pallet. On the sides – clamps for cargo, and the luggage itself, if it does not protrude beyond their height, in our test version it was possible to cover with a movable roller blind. The carrying capacity of a Ford Ranger, like that of a small truck, is 1 ton. Of course, we will not forget about the features of a pickup truck: your luggage should be well protected from moisture and secured so that it does not hang around the whole body, and in general the body is not the trunk of an ordinary car.

Biturbo diesel “four”, as I have already noted, produces 213 horsepower and exactly 500 Newton-meters of torque. An interesting aspect – earlier under the hood of the Ranger Wildtrak was an inline “five” (yes, a 5-cylinder power unit) with a volume of 3.2 and 200 hp. and a torque of 470 N / m.

No less interesting is the fact that the new diesel engine works in conjunction with a 10-speed (!) “Automatic”. It seems that in the competition “who is bigger” Ford breaks into leadership positions! But ten gears are here not only for beauty and intimidation, but also for a smoother and more accurate transmission of torque to the wheels. With such a tandem of the engine and gearbox to disperse a rather large and not particularly light pickup – and the curb weight here is about two tons – it only takes 9 seconds!

The pickup is powerful and fast, but it does not boast of it right away, it only rumbles in the womb at the lowest rpm. In principle, you can stay on them for the usual driving mode, and this will be enough for movement in the stream. 70-80-90 … All these marks the arrow of the analog speedometer passes easily and is often generally invisible to the driver.

And if necessary, cleverly sorting through the gears, the Ford Ranger accelerates very aggressively! Vivid and interesting sensations even require some getting used to, because you can’t expect such agility from a pickup truck 5 meters long and a considerable equipped mass. Drivers of many passenger cars, looking at you in surprise at the next traffic light, are not waiting for her either. Yes, the real “diesel traction” is felt here, if you press the accelerator pedal properly. The Ranger Wildtrak is so assertively gaining speed that it seems this feeling is conveyed even in front of riding cars. On the track, you can feel it very well, and the acceleration pace is not lost even with a serious set of speed. 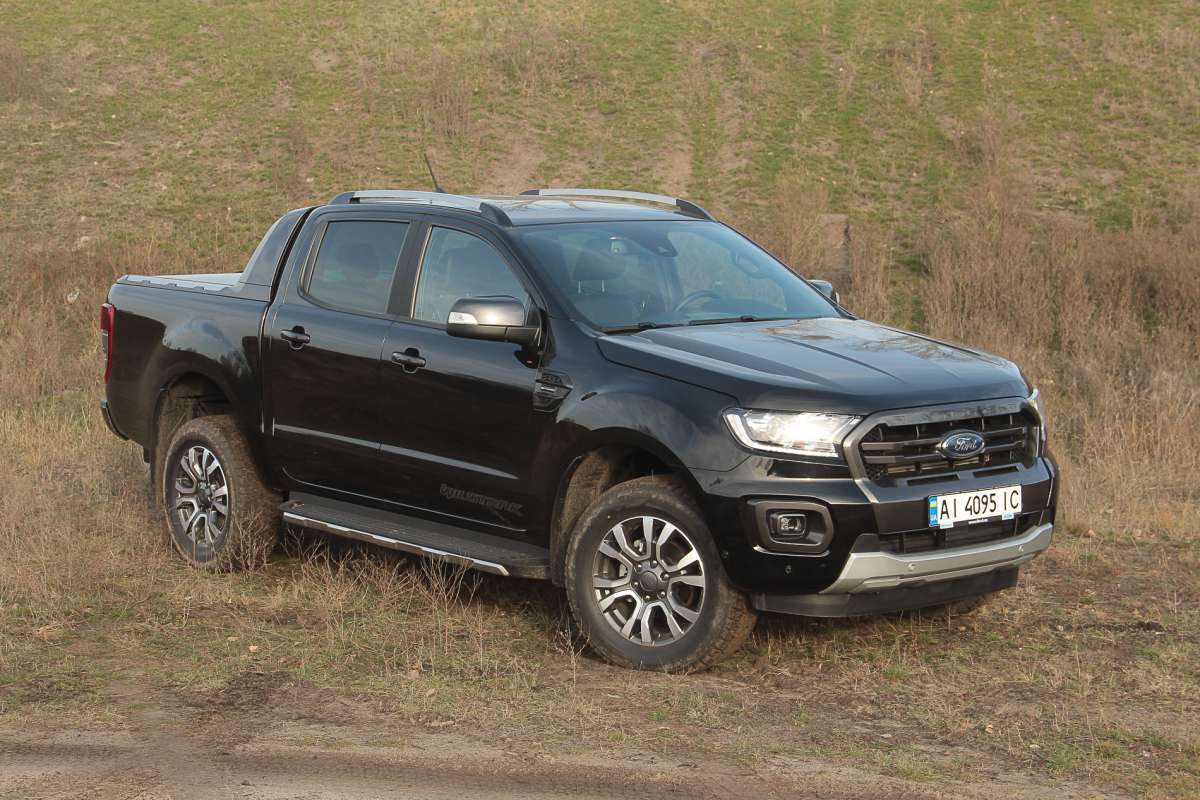 But still, do not forget that you are driving a pickup truck – and although the width of the car feels good, the length is considerable, plus a high center of gravity and inertia, so it is better to brake ahead of time at high speeds. It is worth noting that there is an inertia at low speeds, so there is no point in “forcing” in the city, otherwise driving can turn into a twitch from a traffic light to a traffic light. Moreover, in such modes, the gearbox becomes somewhat nervous. The pickup still loves the vastness more. Nevertheless, the supply of traction makes itself felt, it is pleasant to feel it in such a machine – he lightly touched the gas pedal, and she runs to herself.

I liked the work of electronic assistants. As if on some glamorous crossover, you can turn on an adaptive cruise, hold in the lane and roll, just holding the steering wheel. No, assistants are a cool and necessary thing, it’s just not quite customary to use them on a pickup truck. 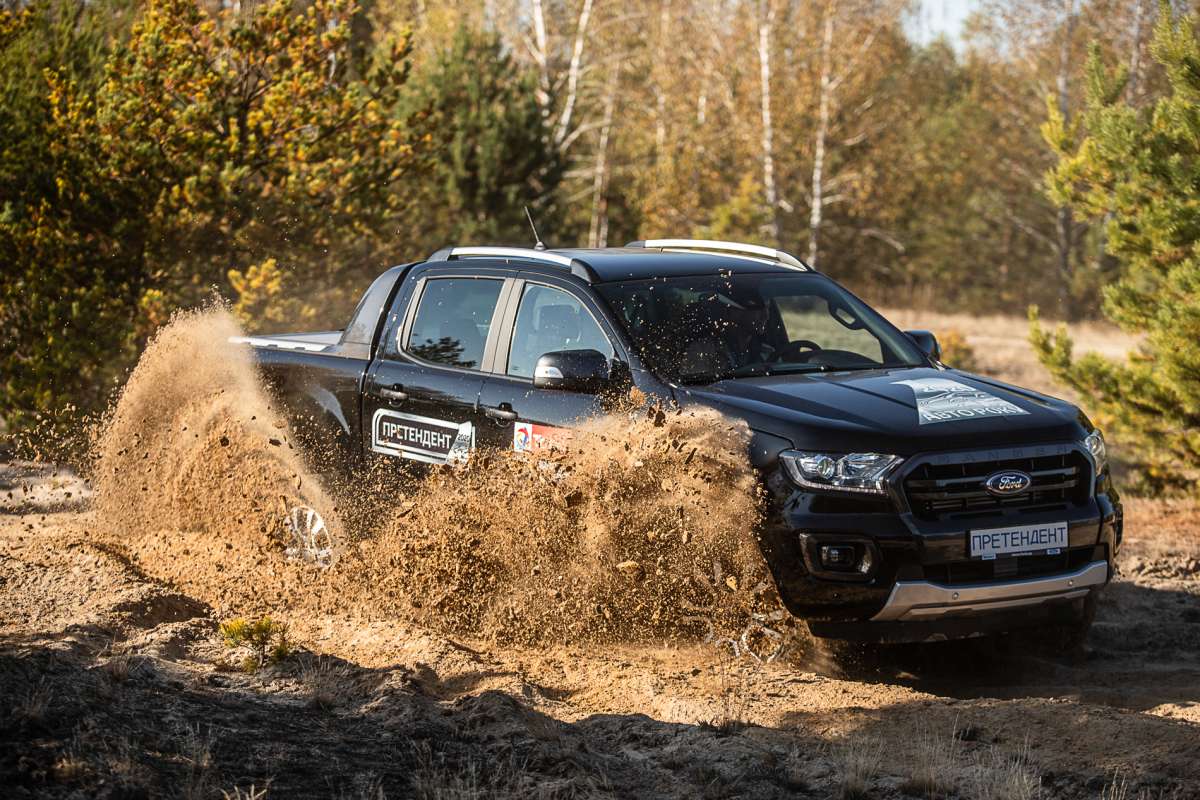 The energy intensity of the suspension is enough not to notice almost any irregularities in our rough asphalt roads and to pass through not the biggest obstacles of soft soils. Sand, snow, rolled primer – on such coatings Ranger seems to be omnipotent. But on stones and more insidious coatings should be careful. However, this is true for any pickups.

The off-road arsenal of Ford Ranger has 237 mm ground clearance, all-wheel drive with lower gear, a rear differential differential lock and a descent assistance system. A great set for any off-road adventure! But it is worth remembering that the all-wheel drive is plug-in full and in fact the 4×4 concept has remained unchanged.

As a result of the test, the consumption in the city amounted to about 13 liters per “hundred”, while on the track you can fit in ten. Is the Wildtrak version worth attention? Definitely! For a relatively small surcharge compared to Limited equipment, you get a powerful high-torque engine paired with a 10-speed “automatic”, a larger set of options with the same cargo transportation capabilities. Although let’s be honest – only a part of buyers use them for this purpose, while the rest take them as cars “for the soul”. And in many ways I understand them …

JAC iEV7s: contender for the Auto Roku title in Ukraine 2020

In the US, catfish crashed into Lexus

Tesla can be fooled by electrical tape