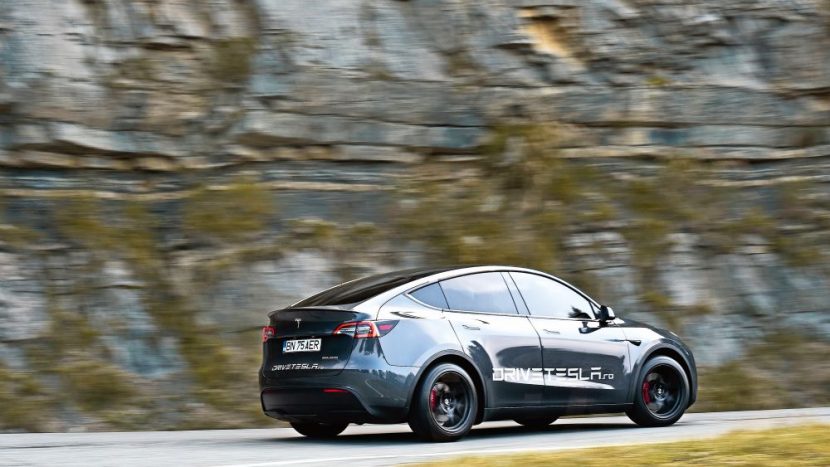 We “tasted” the electrons currently forbidden to Europeans. Tesla Model Y Performance, the elevated version of the top Model 3, is very successful in the USA. However, he will soon come to the Old Continent. A spacious rocket, reaching 241 km / h. Text: Carlo Bellati, Bogdan Grigorescu, Photo: Quattroruote

A preface you shouldn’t miss. A few months before the start of sales in Europe, the Tesla Model Y Performance “landed” in our yard. The Americans phonetically call it the “Uai Model.” Our test copy is in the version available overseas. Elon Musk promised us Europeans a substantially modified version. He says it will be better suited to demanding customers here. However, the size, interior and technique will be similar.

At the base is Model 3, and the European versions will be built in the Giga Berlin plant. It is located on the outskirts of the German capital and will be completed in the summer of 2021. However, the car can already be ordered in Europe. The approximate price is 63,000 euros in the Long Range version and 70,000 in the Performance version. Both have 75 kWh batteries, even though this capacity is not officially declared by Tesla. 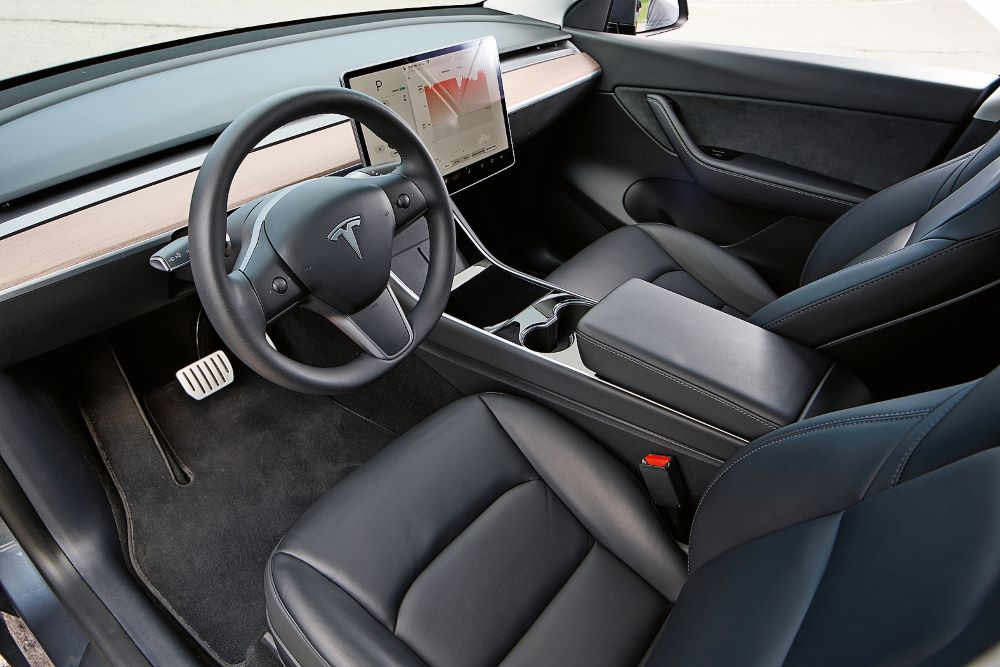 Model 3, which is a sporty model (the driver sits lower even than in an Alfa Romeo Giulia). Compared to him, in Model Y the driving position is radically changed. The driver stands 6 cm higher and has easier access to the car. And the visibility is better, including thanks to the fully glazed ceiling. Between the floor and the ceiling, I measured about 130 cm in the highest area. It also has the inner width at the back. As a result, it travels comfortably in Model Y. The space on the profiled seat for three passengers is so generous that it even allows you to stand on your own two feet!

The architecture is essentially identical to the Model 3. It has a skateboard platform and batteries and motors placed between the axles. However, the ground clearance increased from 140 to 167 mm. It is the most efficient arrangement possible. Thus, it can integrate a huge battery and a charging system at the 200 kW Supercharger stations, the most powerful in the world today. 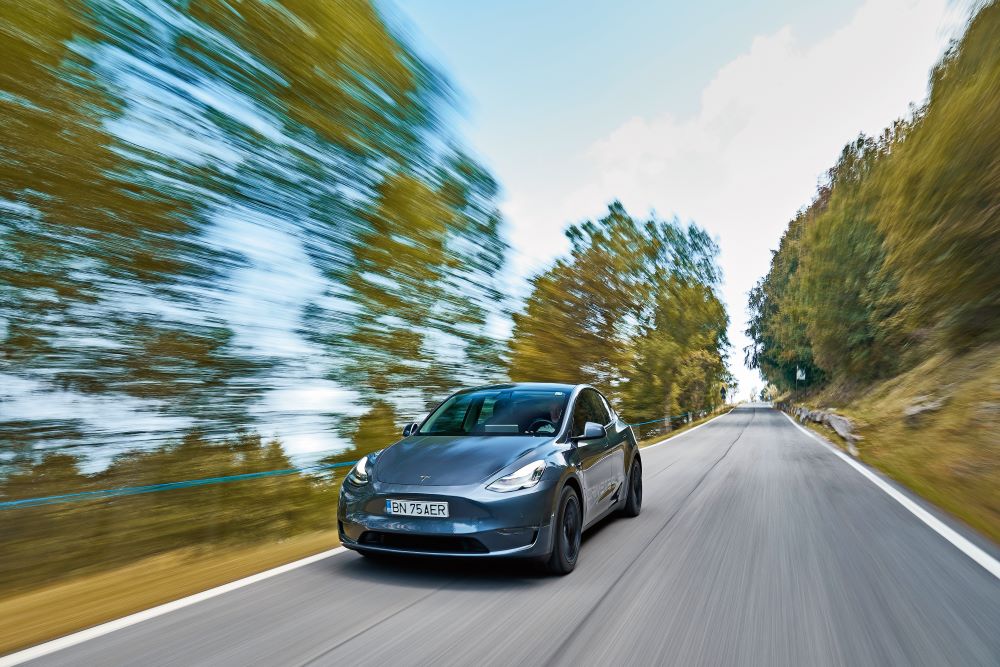 The 130 kg heavier weight and center of gravity positioned above lead to a less incisive response to changes of direction than the Model 3. For a family car, paradoxically, it is a beneficial behavior. It brings with it a more relaxed ride, which can still be considered sporty.

Our model has 19-inch tires with 45 heels. They are clearly less sporty than the top 21-inch tires. But, even so, when you “go” to acceleration (and the 462 hp entices you to do it often), the car does not skid a millimeter, but goes like rails and remains neutral when attacking and exiting corners. However, the instant and extremely strong response to acceleration recommends carefully pedaling the pedal. Traction and stability control systems also need to be activated, especially on wet and uneven roads, where you need some piloting skills.

It feels heavy, like any electric. But at least over 2 tons are under the weight of the BMW iX3 and Mercedes-Benz EQC. In fact, it feels heavy until you turn on the accelerator and stick to the backrest for 4 seconds, ie up to over 100 km / h. Or until you put on the brake, which allows you to adjust the level of current regeneration. If you drive it, you will enjoy a maximum of 241 km / h, but not a Track setting, with ESP completely deactivated, so as not to overload the tires, which would be bombarded by the huge torque and the large mass.

Nothing changes about the control of auxiliary systems. Everything is done through the central touch screen, with generous dimensions and detailed information. The uninitiated will need a lot of patience, even if it helps the large area, the speed of response and the resolution with which the information is displayed. Overall, as with the Model 3, the impression is excellent: powerful sound system, first-class support systems and hundreds of auxiliary functions. Regarding ergonomics, however, a few physical buttons would have made the driver’s life easier. 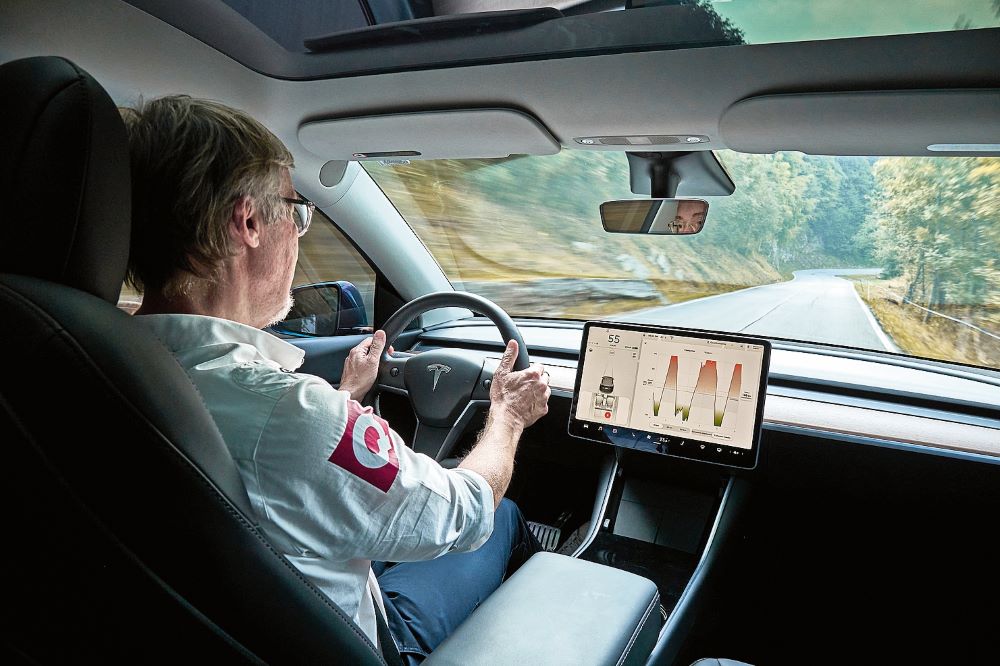 Related to autonomy, we still can’t say. Roads in Romania, with high slopes, revealed a consumption of 20–25 kWh / 100 km, but we know that Tesla is very attentive to energy losses, and the new air conditioning system with heat pump increases efficiency by 10%. The 75 kW should guarantee more than enough autonomy even over long distances, and ultra-fast loads at strong stations will reduce downtime. The WLTP estimate is 462 km. A little optimistic, but not far from the truth.

Model Y is 6 cm longer than Model 3 and reaches 4.75 m, which is felt especially in the rear trunk. The declared 400 l are supplemented by another 100 under the sturdy floor. In addition, in front there is another smaller trunk, of 100 l (the so-called “frunk”, from the front trunk), which opens using the display. The abundance of interior space made possible even the optional equipment of the SUV with an additional two-seater seat, oriented with its back to the direction of travel. In short, 600 l for luggage and maximum versatility, including the bench divided into three elements, 40/20/40%.

The shape of the trunk is regular, and the finishes are relatively good, even if there is no shelf or roller. And if we are still in the rear view area, let’s say that the visibility offered by the central mirror is poor when driving, but it is well supplemented by video cameras for low-speed maneuvers. The height increased to 1.63 m (compared to 1.44 for the younger sister) ensures a large interior space, close to that of the Model X, but without complicating the situation with the Falcon Wings doors, which we do not all like.