My colleagues talked a lot about the design of the new Mazda 3, about the similarity with Italian cars and borrowing motives. It would seem that we can agree! But all this is not so at the same time. So, in detail about the impressions of the new generation of “troika”!

When I wrote these lines, I remembered that at one time the Mazda 3 (BK) was one of the first test cars. Stylish, fast, if it was a 150-horsepower engine, the well-controlled Mazda3 then sold with a bang, and the impressions after the test left the most vivid. Years passed, the generations of the model changed, the style changed and the technical filling evolved, but the “troika” always managed to maintain the image created by her by the very first generation of the model. Did the fourth generation succeed?

The harbinger of the new third series was the Kai Concept prototype, shown at the Tokyo Auto Show two years ago – in the fall of 2017. The basic characteristics were already known then, as well as the fact that the model will be in many ways a “pioneer” – a new platform, SkyActiv family power units with revolutionary solutions , new design philosophy. And now she seems to have focused her attention on herself!

This is Mazda’s signature “Kodo – Soul of Movement” style that continues to evolve. This is embodied in the purity of the lines and simplicity of form, but in the first photos seen, both the concept and serial hatchback looked simply stunning, and the signature red color only reinforced this impression! I was lucky in due time to see the concept itself – it is luxurious.

The serial version adopted a lot from him, almost everything, and the audience’s delight knew no bounds. There were comparisons with Alfa Romeo, discussions of stern, headlamp design and other design refinements. Repeating, perhaps, does not make sense. The new Mazda 3 really looks stylish, charismatic and aggressive, and the play of light and shadow on its seemingly smooth sides may be more interesting than the works of the best designers.

But you cannot do without a “but”, forgive me for the tautology. The feed, in reality, turned out to be somewhat heavy, which is clearly visible from the upper angles and even just from the height of our gaze if you look at the hatch from the side or in the “three-quarters”. The narrowed side glazing line and the massive C-pillar are the main creators of this experience.

But if you do not find fault with this segment, otherwise the new “three” looks very cool! Both optics and the proprietary radiator grill (who invented to hang the number there?), And black accents on the bodywork. And in the end – two exhaust pipes! This is a serious application, but what about the Mazda 3 under the hood?

What is the price?

And there everything is rather modest – for the hatchback in our market, either an atmospheric 1.5 petrol engine with a capacity of 120 hp or a turbodiesel 1.8 with 116 hp is offered. Both are equipped with only a 6-speed “automatic”. There are also two options to choose from – Style and Exclusive. Today, the price of the Mazda 3 hatchback, taking into account the special offer, is 584,100 UAH. Test car, and this is the Exclusive equipment, is estimated at 635 300 UAH. Diesel versions are slightly more expensive: 658,000 and 704,900 UAH. There is also a top-end version of Premium, but it is available only for a sedan and only with a turbodiesel. We will talk about such a machine in a separate material.

The interior of the three was well tailored, but with the advent of a new generation, it changed dramatically. The front panel has become more textured and interesting, here the climate control unit is unusually beaten, and the dashboard has a classic look. But here, there were some interesting chips. Despite the fact that all scales are analog, the central part here is a 7-inch TFT screen!

And the multimedia display (8.8 diagonally, but looks larger), although it remained separately mounted in the center of the dashboard, but now it looks more organic. It is controlled only with the help of the washer in the central tunnel. However, navigating the menu is easy, it is simple and concise, I was only confused by the strict black background.

Climate control unit is more difficult to understand. By itself, it looks compact and stylish, but using its not-so-understandable buttons and peering into a small screen is inconvenient. 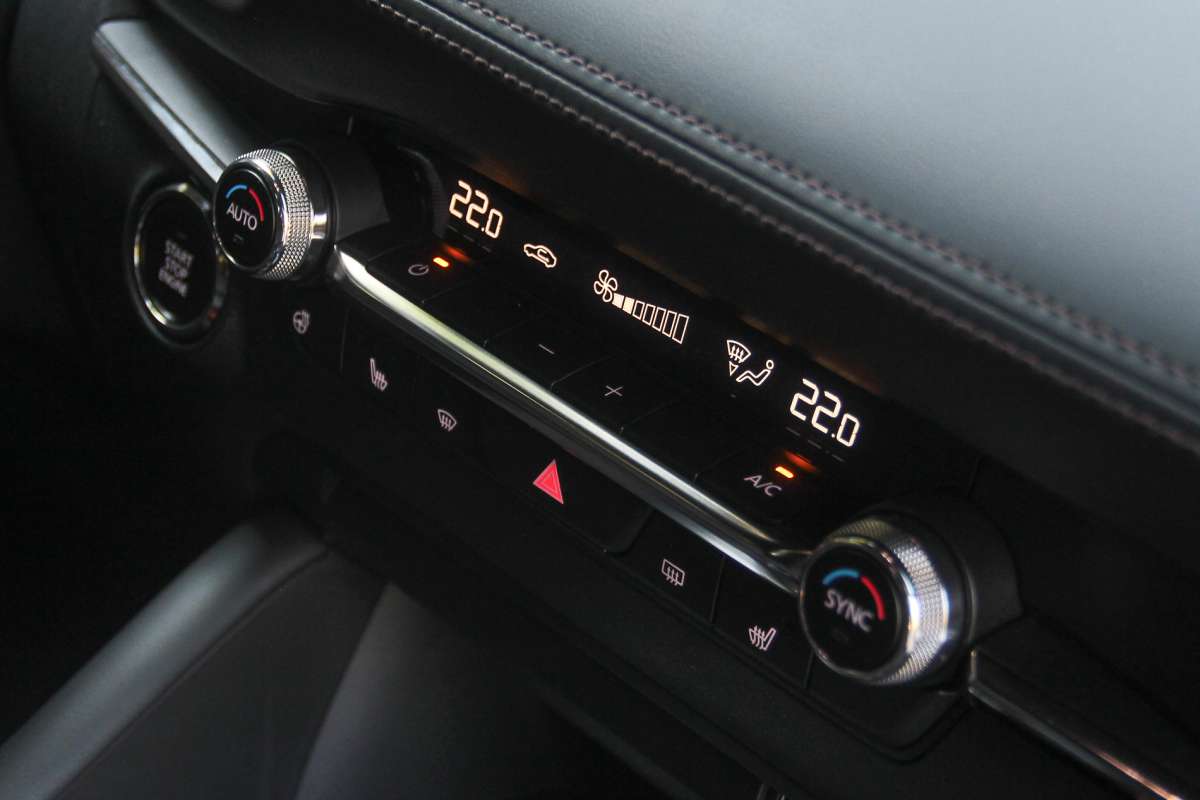 But in general, there is no busting over the buttons, and all the auxiliary controls are conveniently and logically placed, it’s easy to get comfortable with them. And if not for this very climate control, everything is convenient at the driver’s workplace: excellent readability of devices, electronic assistants’ control buttons to the left of the steering wheel (and there are a lot of them in this configuration!), To the right are traditional blocks. The steering itself will please with heating, which is already in the base and with “expensive” buttons on the knitting needles – both visually and tactilely they are very good. And the seats, although with fabric upholstery and are simple in appearance, hold the body well, and you do not get tired in them even on a long journey.

Behind, surprisingly, I fit without embarrassment (height 1.82 m.), Although at first there were such fears! The landing is comfortable, the terrain and the angle of the sofa are chosen well! And the landing is also simple, except that the pillow itself is rather low. With the transition to the new Skyactiv-Vehicle architecture, the Mazda 3’s wheelbase has grown by 25 mm (2725 mm) compared to its predecessor, so there is no restriction on the legs. You can only visit the small windows (for some reason Toyota C-HR came to mind) that give not so much light and visually reduce the internal space.

The trunk also added in volume and now is 398 liters. Everything is executed inside soundly, with smooth upholstered walls and folding backs on a flat floor. It is a pity only, there is no dokat under the raised floor.

It’s no secret that Mazda is cultivating the construction of good atmospheric engines, and under the hood of the new three is one of these power units. From one and a half liters of volume, engineers extracted a lot – 120 horsepower. But given the stringent Euro 6d-Temp standards that this powertrain, automatic torque converter and 1300 kg curb weight of the car, you can forget about fast driving. Acceleration to “hundreds” takes 12.1 seconds … It’s a sin to say, but the “three” of the first generation with 1.6 on the “automatic machine” showed practically the same result. 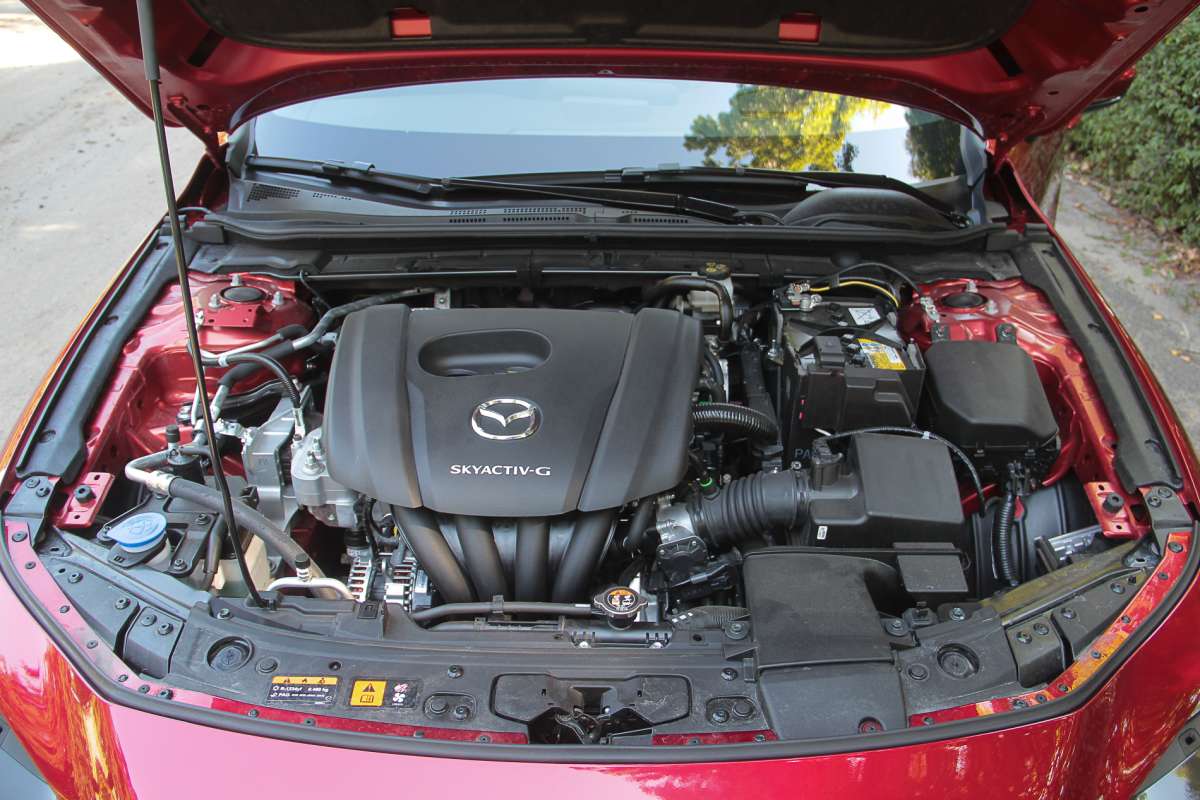 At first, I really got the impression that the hatchback “growls, but does not go.” No, he is driving, but not in the way you expect, having seen enough of the exterior of the car. And in order to somehow get a return on those horses, the engine will have to be twisted. For a less dynamic driving, the tachometer needle should lie in the region of 5 thousand revolutions. The soundtrack is rustic and quite tiring quickly. And why such a ride? Well grabbed once, another, and then? Yes, the thrust here is very predictable, honest, without turbo-grips, but if you use the Sport mode here, it’s not often.

Although the steering is great! Easy, accurate, very “Mazdian-style” tuned! Yes, and the chassis is not a miss, the hatch stands perfectly on the arc, will grow a dense, assembled suspension and for a long time will not “admit” that it has a torsion beam behind. No, this ensemble clearly needs a more powerful motor, and then the “troika” will open in all its glory!

But if you go usually without requiring dynamics from the car, you can catch a buzz, how helpful the car is. Judge for yourself: here are adaptive LED headlights, and adaptive cruise control, which can stop at traffic lights (and start moving of course!), And a retention system in the lane, and an all-round visibility with an excellent picture. And, of course, the I-ACTIVSENSE complex, which always monitors the situation around the car, and in case of emergency, can stop it. This complex has been put on Mazda for several years, but its capabilities are constantly expanding. So, he already knows how to recognize including cyclists.

During the test, the flow rate was about 8 liters per “hundred” kilometers. Maybe a little more, maybe a little less, but it’s hard to get to the declared 6.8 liters in the city, except on a day off.

Heart transplanted to the young Chery

Heart transplanted to the young Chery