The Mazda 3 sedan is built on the same platform as the three-door five-door hatchback and uses all the same technical solutions. And here I recall the expression of lawyers: There is a letter of the law and there is the spirit of the law. So, by “letter” a sedan with a hatchback is distinguished by the presence of a trunk, but by “spirit” it is a completely different car. Last but not least, because …

Appearance Mazda 3 hatchback everyone is discussing hotly and violently. Some people really like the design of the rear part, others consider it a bit heavy, others recommend looking at the cars of Italian manufacturers … Everyone speaks calmly and positively about the sedan. The Japanese decided that the new car will be in the spirit of world trends.

Or maybe on the contrary, the craving for visual laconicism affected as a tribute to Japanese traditions? After all, the secret of the most beautiful and ageless images is precisely in their simplicity. How many times has it happened that a new car comes out with unusual solutions that are catchy and memorable. And two years will pass – and by restyling the car looks already boring and outdated. Whether business when design is organic and each line in a car is worth its weight in gold. It looks like a sedan about the new three.

The interior of the car of the last generation was good for everyone. And it’s beautiful and comfortable, it has even been compared to “BMVshennoy” more than once, which can’t be called a compliment. But the Japanese themselves are transcendental perfectionists. It was as if the new three were being prepared to be cut not for life, but for death with premium competitors. Everything is restrained, concise and visually expensive. But what about practicality? 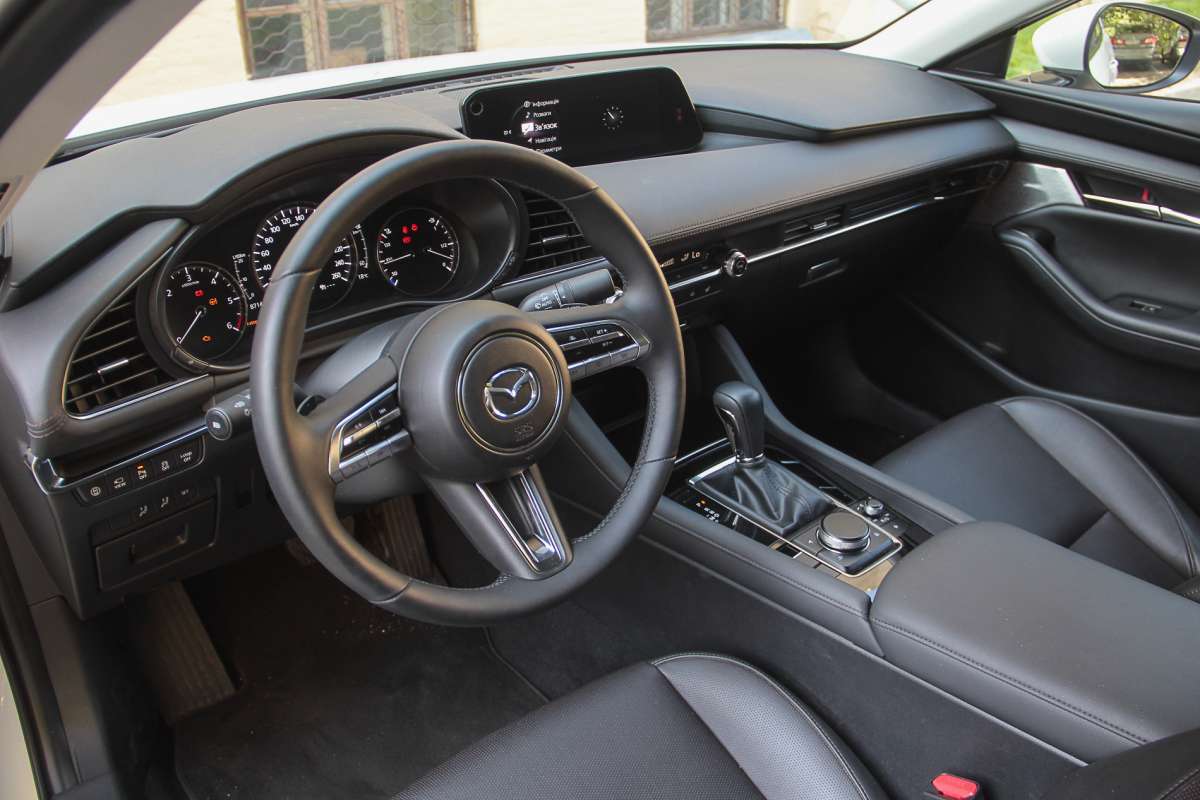 The increased longitudinal range of adjustment of a steering column by 20 mm does landing more convenient for tall drivers. I liked the wide armrest between the front seats and the large space for shallow luggage inside it. Plus, at the bottom of the center console there is a convenient shelf for the phone and purse. In the pursuit of beauty, yet the voice of practicality did not go by the wayside.

On the instrument cluster at the edges are conventional instruments: a tachometer and a combination of a fuel level sensor and coolant temperature. But in the center there is a screen on which the arrow speedometer can be displayed in several design options: fuel consumption and cruise control modes at the edges, driver assistants, etc. By the way, the display is so contrasting that the speedometer information displayed on it can be read exactly as easily as with ordinary pointer devices next to it.

Display infotainment system left no touch! In an age of ubiquitous touchscreens, this is unusual. But I like it, and for two reasons at once. The first is a security issue. To press a button on the touch screen you need to be very distracted from the road. After all, you won’t find it to the touch, plus you need to make sure that it still worked. This takes up to several seconds of time, which on the road can be critical. And the second reason is much more commonplace – I’m just annoyed by the flabby touchscreens. Yes, their flocks are made with an oleophobic coating and fingerprints are no longer so visible, but still visible. And in the Mazda 3, everything is simpler. There is a control washer – and use it! I will not say that it is very convenient, but it is not annoying either.

As for the space in the cabin, if in a hatchback with its sports raisin a tight fit behind the wheel and the lack of extra space is perceived as “OK”, then in a sedan that is positioned more like a family car, there is a feeling of space without surplus. First of all, of course, we are talking about the rear row of seats. Although, in fact, there is more legroom, because the wheelbase has grown by 25 mm compared to the previous generation.

If we talk about the luggage compartment, it is very roomy – 450 liters (no spare wheel – only repair kit). But the loading door of the sedan is not large, and the height of the trunk threshold is considerable. So carrying large luggage here will be inconvenient. It’s just about a pram.

Interestingly, the diesel car is much more fervent, and the engine with 116 hp. and 270 Nm of traction is much easier to cope with the weight of the car. And here it would just drive in the “sport” mode. But Drive Selection is only offered for gasoline cars. Although the difference in acceleration is felt more in driving on the highway and in overtaking. After all, the initial acceleration dynamics in cars with gasoline and diesel engines is exactly the same – 12.1 seconds to 100 km / h.

All generations of treshki were imbued with a unified philosophy of driver’s cars. Remember their trademark Zoom-Zoom? But in the new troika there is one change that does not fit into that old image. In the new car, the rear suspension with independent multi-link was replaced with a semi-independent. So what? Yes, she is not so finely tuned for a sophisticated driver who appreciates drive on winding tracks. BUT! It is much simpler, cheaper and more durable, which will please everyone else. Yes, however, sophisticated drivers too, but not by what she does, but by what she does not. The semi-independent rear suspension will definitely be much more durable and will not require much attention and repair much longer than a multi-link with a bunch of bushings.

Instead of a complicated rear suspension, the Japanese emphasized electronic active safety systems and driver assistants. Indeed, even in the simplest configuration, there is already a G-VECTORING CONTROL PLUS, a stability control system and an emergency braking system. And already starting with the average configuration, a whole fan of systems appears: monitoring driver fatigue, keeping the car in a lane, a blind zone control system and even active cruise control.

What is the price?

Mazda 3 sedan has the advantage of one configuration over the hatch. The sedan, like the hatch, is offered with gasoline 1.5 liters (120 hp) and diesel 1.8 liters (116 hp), and only with a 6-speed automatic transmission. But if the hatch is sold in a complete set of Style or Exclusive, then for the sedan there is also the most top-end – Premium. It was she who visited us for a test drive.

Moreover, the most expensive equipment is available only with a diesel engine. If we talk about the set of options that distinguishes Premium, then this is a leather interior, keyless entry system and Bose audio system with 12 speakers. To be honest, I would prefer Exclusive equipment. The lack of a leather interior and keyless entry for the car are not critical. Yes, the Bose audio system sounds really very cool, but the cost difference is palpable (1.8 D Exclusive 704 900 UAH versus 1.8 D Exclusive for 731 100 UAH). Although if you divide it into three options … Well, if you really want a diesel engine and pulls to save, then you need to take the version with the minimum configuration Style. It can now be bought at a discount for 658 000 UAH (regular price 710 900 UAH).

The BMW M said they were ahead of the competition

Almost half of Americans will choose Ford instead of Tesla

Almost half of Americans will choose Ford instead of Tesla

Kia has updated the business sedan, which is larger and more powerful Optima