Jogger, the first hybrid and the longest Dacia car

AutoExpert was in Paris to see the new Dacia Jogger model before the world premiere. Here are all the details of the biggest model of the Romanian brand. 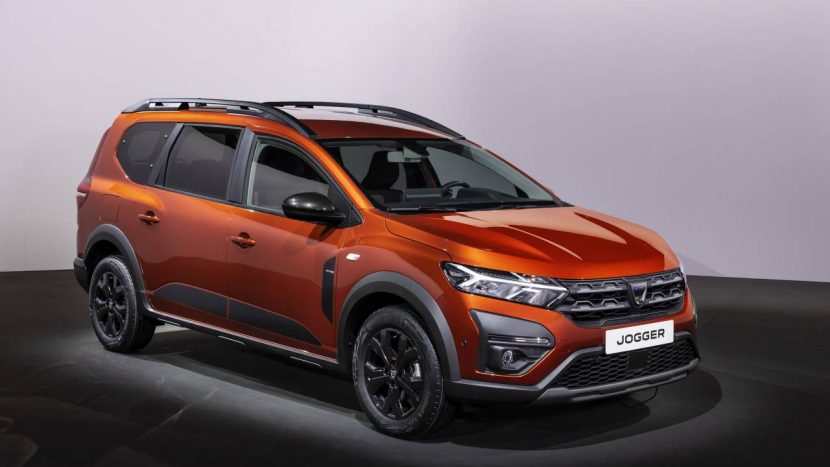 We have known for more than a year that Dacia will include a new model in its range. One completely different from what the brand has offered so far. It was said about the future seven-seater vehicle – which, since the end of August, has a more or less inspired name, Dacia Jogger – that it will be a station wagon. Or a minivan. Maybe an SUV. Well, after discovering with our own eyes the new model we can say that it will be all together. Or, to keep up with the latest industry trends, a crossover.

Dacia Jogger is a station wagon because, derived from Sandero, it has its front part and an impressive length of 4,547 m. It is a minivan because the passenger compartment in a single cell can accommodate up to seven people with related luggage. And it is an SUV because it has a ground clearance of not less than 200 mm. Moreover, the special edition Extreme seen by us in Paris, has on the body elements similar to those already present on Stepway models of the local manufacturer owned by the Renault group.

Dacia Jogger, the longest model of the brand

Returning to the dimensions, it must be said, because the images can deceive the eyes, that the Dacia Jogger model is 74 mm longer than the first generation Logan MCV and 49 mm longer than Lodgy. Also, the wheelbase of the new vehicle – 2,897 mm – exceeds by 87 mm that of the Lodgy minivan and is only 8 mm smaller than that of the Logan MCV station wagon (first generation).

As both models we compared offered space for up to seven passengers, you can now imagine where the new Jogger is in terms of exterior dimensions. Only, to the above you need to add a trunk volume of 213 liters with all the seats in normal position. For comparison, the Lodgy minivan had a trunk of 207 liters, and in the case of the Logan MCV (first variant) the luggage space was non-existent. If only two people are accommodated in the front seats (with the middle seat folded down and the seats in row 3 removed), the Jogger can carry up to 1,819 liters. Objects with a maximum length of 1,150 mm take place in the same configuration in the machine.

And, to conclude the dimensions chapter, it must be said that the car can easily transport seven people as promised by the manufacturer. The height of the passenger compartment and the distances between the seats allow a comfortable journey – within the limits of Dacia – even if all passengers are adults. Including the third row of seats! The only point where some space would have been needed is the one offered by the bench in the middle, in width. There, three adult passengers may have a problem traveling long “shoulder to shoulder”.

It is important to mention that, inside, Dacia Jogger also offers storage spaces that accumulate 24 liters.

We started, atypically, with the interior, because this chapter is, in our opinion, the most important for potential customers of Jogger. From the outside, the new model can be easily identified as belonging to the Dacia brand. That is if you look at the front, where even an uninformed person can recognize the clear lines taken from the Sandero Stepway, because from behind the vehicle brings more with a Volvo model. Observed from the side, the Jogger really shows its dimensions, and the way in which the designers managed to ensure the increase of the space in the passenger compartment seems similar to the one used by the Czechs for the Skoda Roomster. This is because in the area of ​​the B-pillar – wider than that of the Logan or Sandero models – there is an elevation, somewhat artificial, but very useful for passengers seated on the second and third rows of seats. 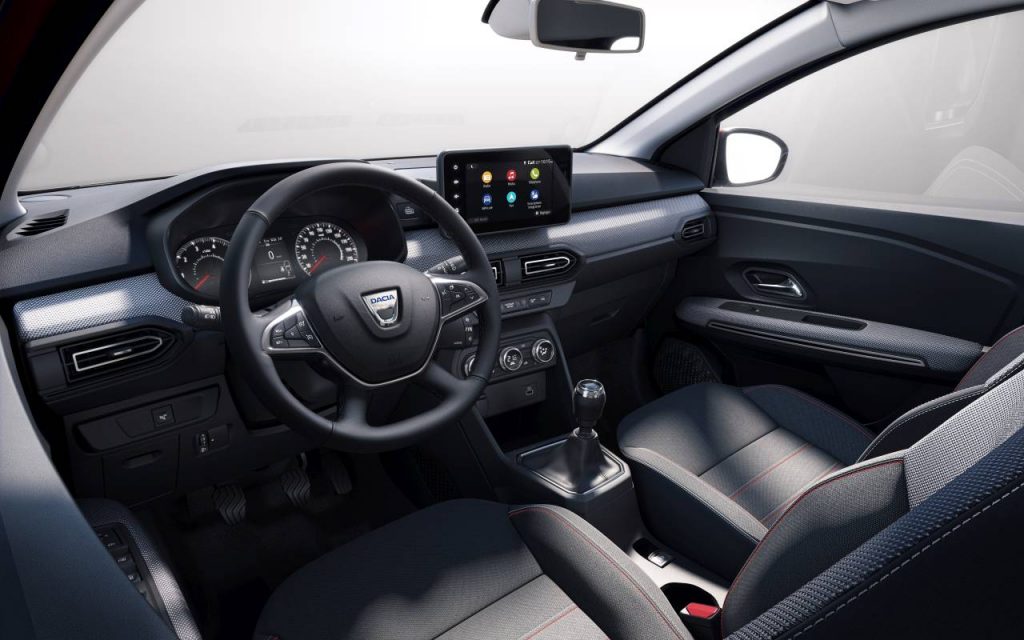 Thanks to the vertical optical blocks located on the height of the C-pillars, the tailgate has generous dimensions. To this important detail for the loading space are added the roof rails, which, like the Sandero Stepway, can be moved transversely when an additional trunk or a support for bicycles or skis is placed, but also the plastic protections in the area of ​​the wheels. and the bottom of the doors. And, if we keep talking about doors, it is worth mentioning that access to the second and third rows of seats is facilitated by the extension of the rear. They have a width close to that of the front doors.

Aligned to the Dacia range

Otherwise, Jogger is a new generation Dacia with all that entails, from the “Y” signature headlights to the dashboard, electronic command, control and entertainment equipment.

The new seven-seater Dacia model is based on the same CMF-B platform as the Logan and Sandero models, or Renault Clio and Captur, and this allowed, in addition to the placement of a new range of engines, the car to be equipped with the latest safety equipment. and driving assistance. Jogger therefore has Emergency Brake Assist, Blind Spot Warning, Park Assist or Hill Start Assist, as well as the three multimedia system variants – Media Control, Media Display or Media Nav.

In terms of propulsion systems, Dacia Jogger will start with the already known ECO-G 100, the engine that can be dual fueled with gasoline and LPG, and offers a cumulative range of over 1,000 km. Also, when opening orders – in November of this year, as Dacia officials present at the presentation in Paris said – customers will be able to opt for a completely new engine in the range, TCe 110. It is based on the 1.0 engine. liters, three-cylinder, and direct injection. 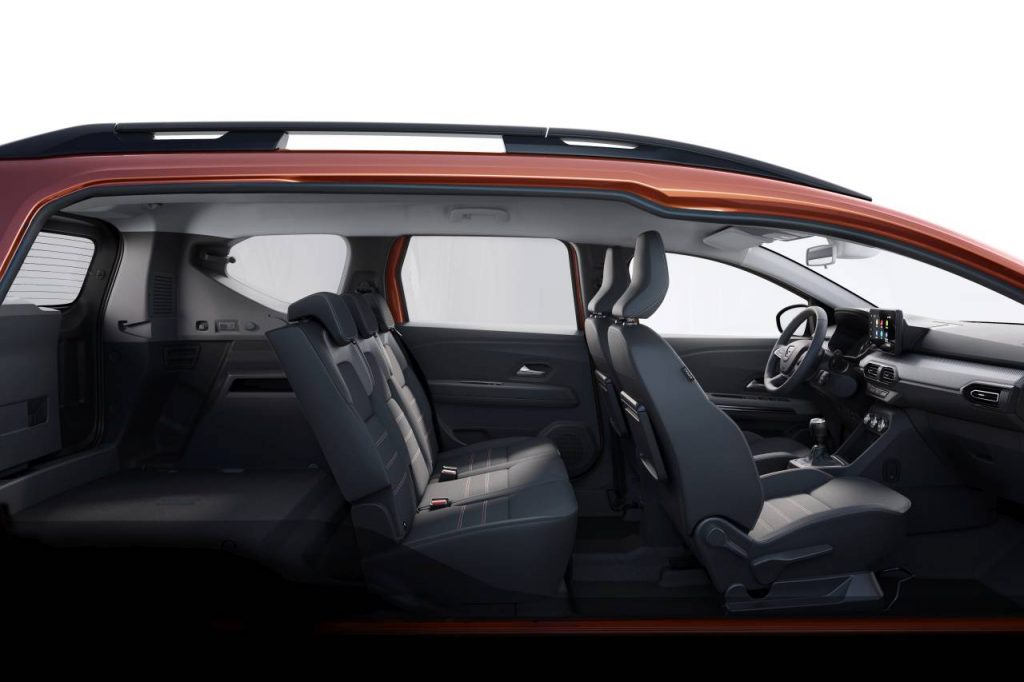 Later, in 2023, the same Dacia officials promise to equip the car with the first full-hybrid system in the brand’s history. For this, a solution will be used that can be discovered today on Renault Clio and Arkana E-TECH. The technology involves the use of a 1.6-liter heat engine and two electric motors – one for travel and one for starting. The power offered is 140 hp. Thanks to regenerative braking and 1.2 kW batteries, the vehicle can cover short distances in 100% electric mode. Dacia even claims that 80% of the road traveled in cities can be covered in electricity, thus reducing fuel consumption by 40%. Of course, this data is collected after tests performed by the manufacturer under specific conditions. The hybrid system that will be located on the Dacia Jogger will be completed by an automatic transmission also taken from the Renault Clio.

During the presentation in Paris, Andreea Guinea, product manager for Dacia Jogger, also revealed that the basic model of the range currently has an estimated price of about 15,000 euros. Of course, until the launch of orders in November 2021, this value may change, but this milestone is very important for those who make plans to purchase such a vehicle. And, comparing apples to apples, Jogger has the chance to become, like the other Dacia models in their segments, the most affordable model on the market.

Another important detail offered by Dacia officials is the decision of Renault’s management to allocate Jogger for production to the Mioveni plant. Thus, the Romanian factory will complete its portfolio now composed of Duster, Sandero Stepway and Logan with a fourth model. At the same time, this information reveals that Renault officials do not expect major sales of this model, as the plant’s production capacity is currently insufficient for major increases in assembly rate. In fact, being part of a segment dedicated to large families or businesses that involve the transport of more than five people, Dacia Jogger enters a rather restrictive market area. This is why few volume brands currently have minivans or seven-seater crossovers in their portfolio.

Compact smaller than the Bigster

It is also worth mentioning that the Jogger model was presented in Paris as a compact class vehicle (C) despite the fact that in the Renaulution plan revealed earlier this year by Luca de Meo, CEO of the Renault group, and Denis le Vot, CEO of the Dacia brand, the first compact model of the Romanian brand should have been the Bigster SUV, scheduled for launch in 2024 – 2025.

Do they pollute electricity more than thermal vehicles? Here is the answer!

44 percent of Americans are willing to abandon personal cars

BMW announced the debut date of the electric crossover iX3

44 Ford Ranger in service in Kyivstar