Ioniq vs Prius. Hyundai vs Toyota. Hybrid vs. plug-in hybrid. 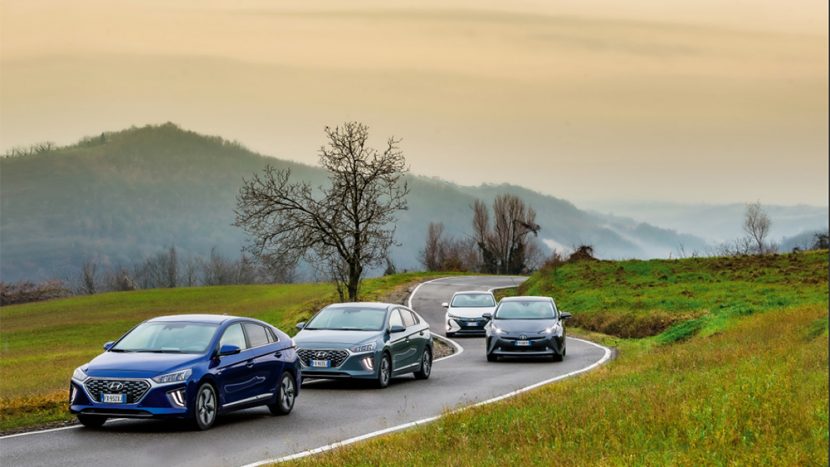 With or without socket? Classic hybrid or plug-in? To understand the advantages and disadvantages of the most fashionable propulsion systems, we compared two of the most successful exponents on the market. Ioniq vs Prius. Photo: Quattroruote

Hybrid – the term that describes the most popular propulsion systems today. Basically, it is the cornerstone of electrification and traces the direction of the electric motor in the decade we have just begun. However, it still confuses drivers and not everyone understands the differences between the types of hybrids and the advantages of each. So, here is a double comparison between technologies and models: simple hybrid and plug-in in Hyundai and Toyota interpretations. Essentially, two Ioniq versions versus two Prius versions. 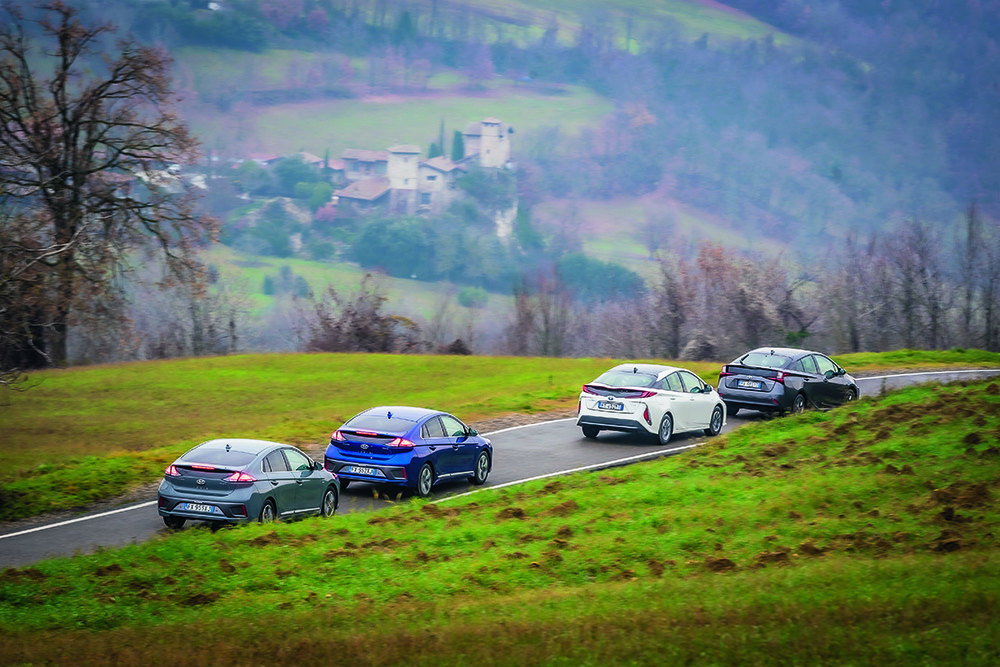 Before “getting into the bread”, let’s look at the differences between simple and plug-in hybrids. First of all, we must mention that the electric motor is bimodal. That is, it can produce mechanical energy when it is powered by electricity and can do the exact opposite, that is, produce electricity, if you train it mechanically.

In hybrid propulsion systems, this feature is exploited both for clean propulsion and to charge the battery during deceleration (when the electric motor is driven by the wheels, through the inertia of the car), thus partially reusing that energy that the brakes would transform. in the heat and would waste it in the atmosphere. Subsequently, the energy thus stored in the battery is reused to propel the vehicle. An original, if not brilliant, way to optimize the flows of all types of energy on board (thermal, kinetic and electrical). 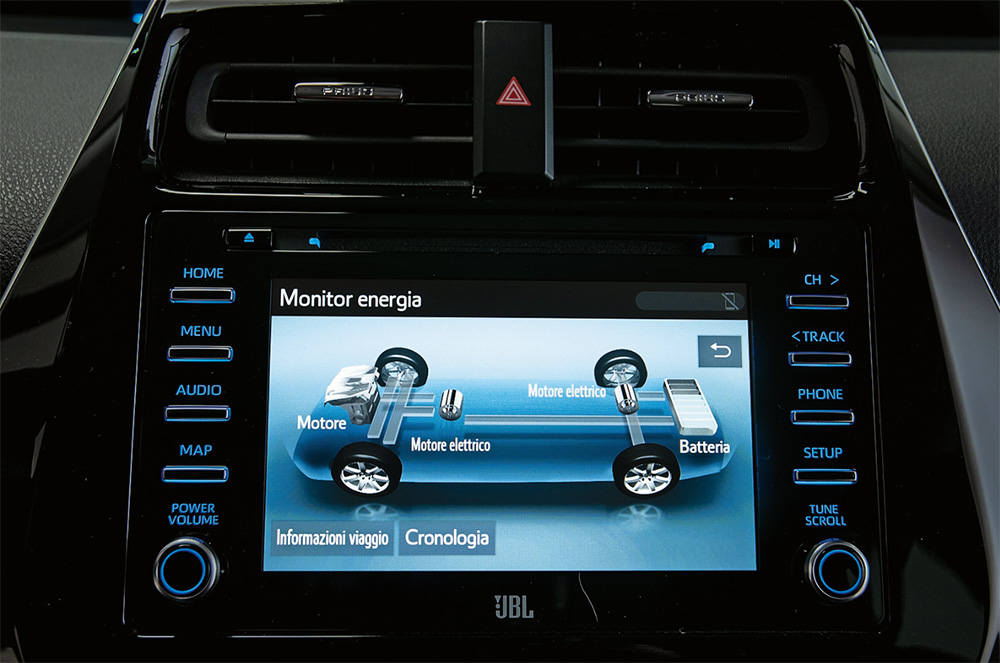 For plug-in hybrids, the operation is virtually identical, with the additional possibility of recharging the battery from an external power source. Thus, the electrical component becomes more important, the capacity of the battery and the power of the electric motor increasing and more sophisticated electronic elements are needed. 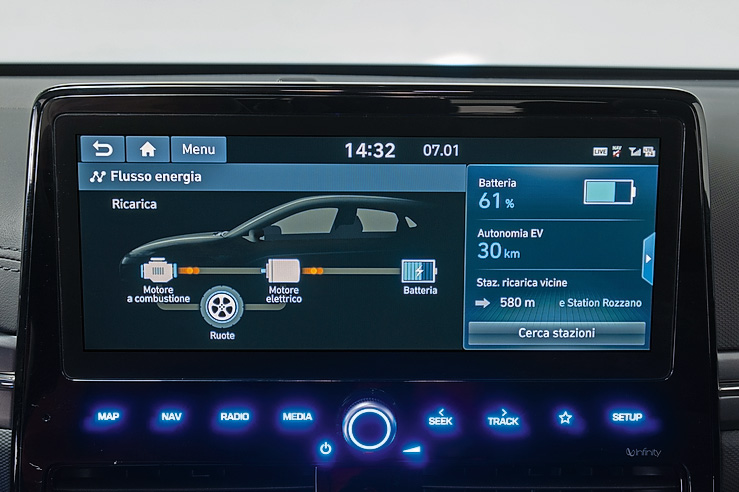 All this allows you to travel several tens of kilometers purely electric, so without emissions. The disadvantage is the increase in weight and the high complexity of the system, which is reflected in higher purchase prices by 7-8000 euros. And so, we come to the test models – Toyota Prius, the most iconic classic hybrid, in the 1.8 AWD-i version, faces the Hyundai Ioniq 1.6 Hybrid, while the Prius Plug-In fights the Korean equivalent.

Ioniq vs Prius – beyond schemes

Freshly passed through an important facelift, Ioniq presents a harmonious design, which results in indisputable aerodynamic qualities. The differences between the hybrid and the plug-in are limited to the rims and a few details. The Prius is simply the Prius, being difficult to define in classical aesthetic terms. Much longer than the Korean (by almost 20 cm), the Prius follows its own laws, according to which the appearance is dictated only by functionality and aerodynamics. Unlike the Korean pair, there are sharp differences between the two Priuses – for example, the front areas are completely different, and the hybrid has a more traditional back, with horizontal touches. 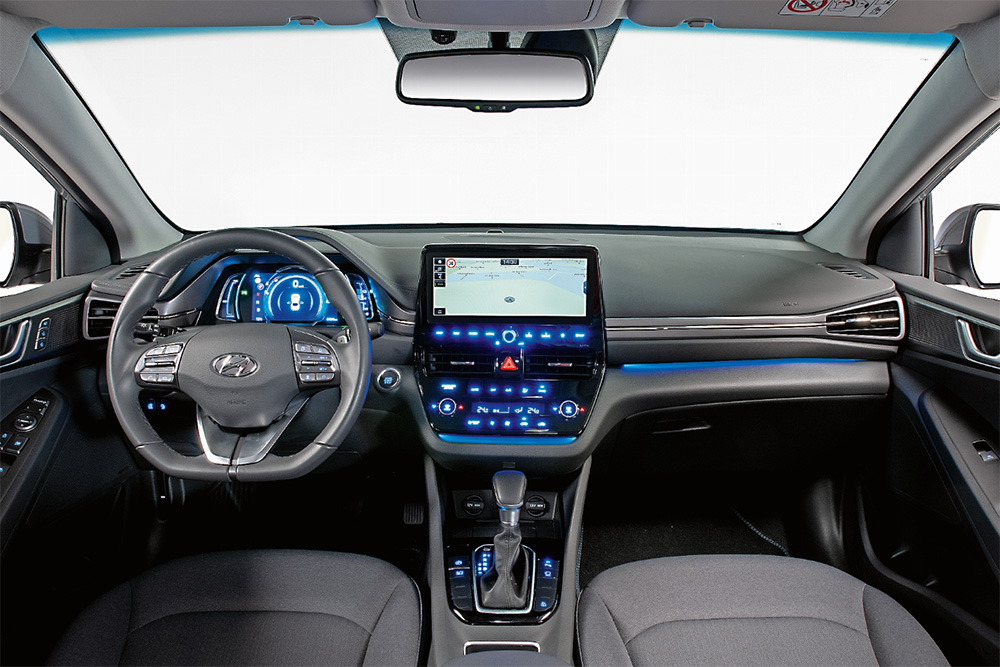 Despite the larger size, the interior space of the Prius is comparable to that of the Ioniq, both models being optimized for transporting four people. The Korean brothers offer a modern cabin, dominated by the large 10.3-inch touch screen of the new Bluelink multimedia system, positioned high in the center of the dashboard. Having your own data SIM card allows you to always be online, with all the opportunities that arise from here: real-time traffic information, alternative routes, charging stations, dedicated applications, etc. 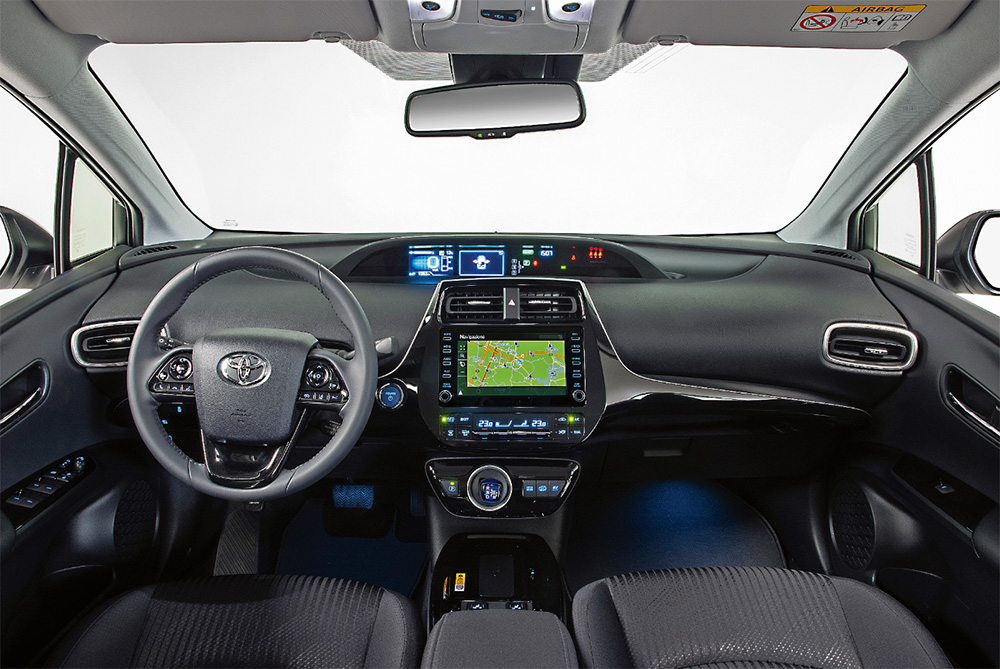 The interior of the Prius, on the other hand, looks older, with its perfectible ergonomics and less intuitive information displayed. The two screens in the center of the dashboard are harder to read than the large TFT screen from Ioniq, and the Touch 2 multimedia system fails to keep up, especially in the absence of Apple CarPlay and Android Auto compatibility. Basically, on board the Korean, whatever the requirement, the solution is simpler. The driving position is similar: sit down at the wheel (50 cm from the ground in the case of the Prius and 47 cm in the case of the Ioniq), with the legs relatively outstretched and the steering wheel positioned correctly.

Ioniq vs Prius – on the road, Korea beats Japan

Clearly, none of the hybrid models is sporty, but the power and torque developed by tandem engines are sufficient in traffic. The Korean feels more sporty, thanks to the well-adjusted double-clutch gearbox that allows you to change gears, including using the paddles on the steering wheel. Therefore, Ioniq feels like a conventional car. The Prius, on the other hand, is substantially different. The e-CVT does not establish a direct relationship between engine speed and wheel speed, therefore requiring fine dosing of acceleration, because it revs more than seems necessary. 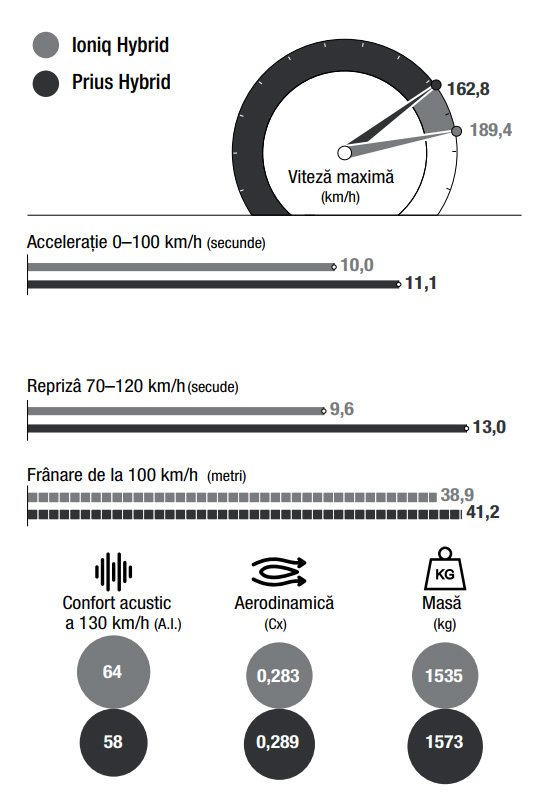 And in the case of plug-in versions, you can select EV mode and use only battery power, or you can opt for hybrid mode, leaving the system to decide when to use each type of power. At Ioniq, the system also takes into account the information provided by the navigation system if you have entered a route. If the daily routine comes down to an hour or two of driving through the city, then the two plug-ins will give you great satisfaction related to driving comfort and ecological aspirations, as well as significant savings (although it is impossible to quickly recover the price difference which separates them from hybrid sisters). 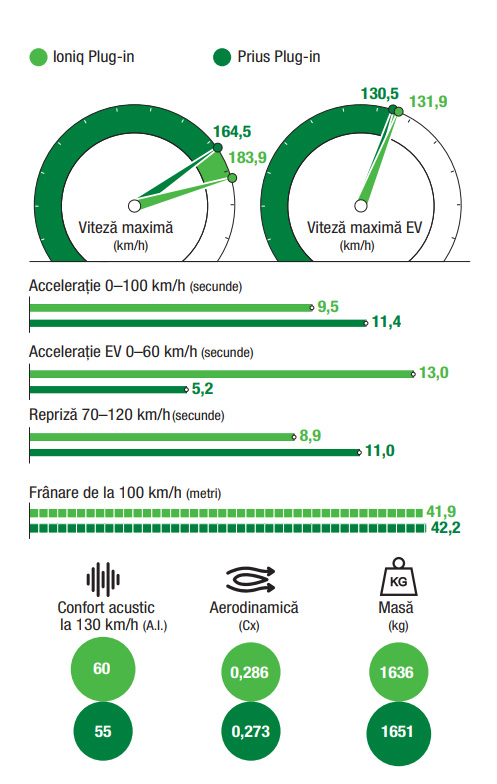 And here, if you are looking for driving pleasure, the Korean is the answer. Finally, in terms of warranty, Ioniq comes with 5 years without mileage limit and 8 years for batteries (but not more than 200,000 km), while Prius provides 3 years or 100,000 km of quiet and 5 years for all components propulsion system (including batteries).

Ioniq vs Prius – how to recover energy?

The production hybrid was born with the Prius in 1997. The idea of ​​this propulsion system is to reduce fuel consumption, and therefore emissions, by recovering kinetic energy when releasing acceleration and light braking. The generator converts energy into electricity, stores it in the battery and then uses it to power an electric motor at acceleration. 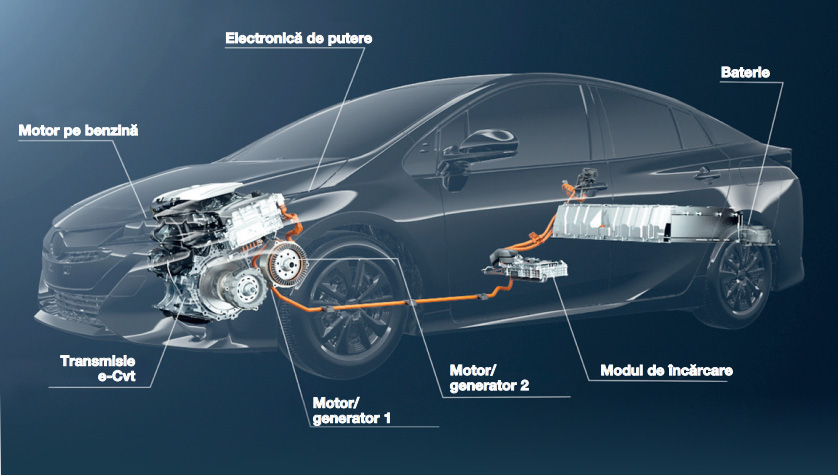 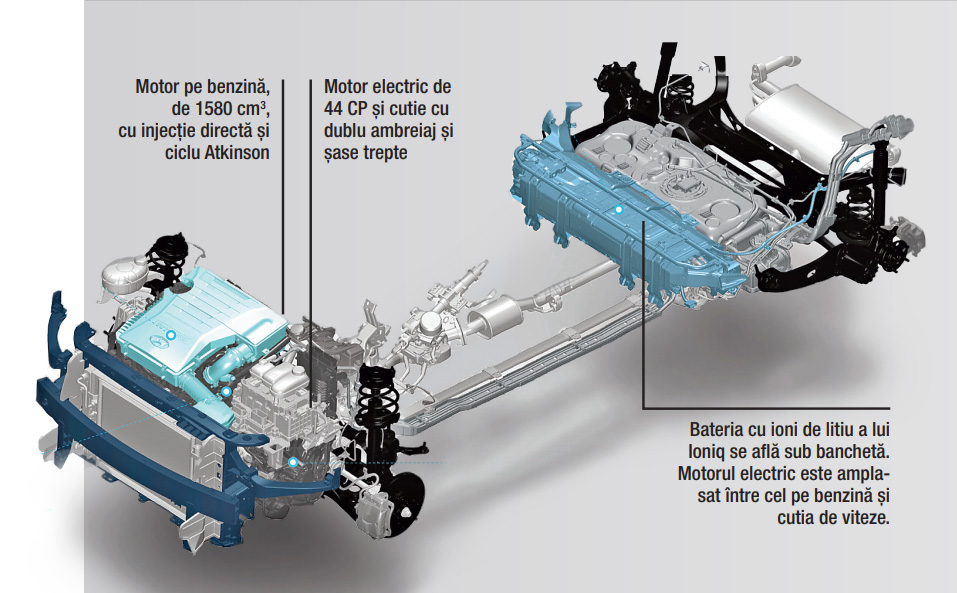 Hyundai “goes” on the double clutch

The other manufacturers used different solutions, which usually consist of placing the electric motor / generator between the heat engine and the gearbox, separating the two engines with a clutch and thus allowing them to work together or separately. This is also the case with Hyundai, which combined the electric motor with permanent magnets with a gasoline one, powered by direct injection, coupling them to a dual-clutch transmission and six gears – an architecture that ensures a driving behavior similar to that offered by conventional engines.

The plug-in versions also keep the same propulsion schemes (in the case of the Prius, without the third electric motor, from behind), but the batteries are much larger, because they have to guarantee electric running for several tens of kilometers, having from over 1 kWh to almost 9 kWh. At Ioniq PHEV, the power of the electric motor increases from 32 to 45 kW, to ensure propulsion up to highway speeds. Then add the on-board charger and the power outlet to the power stations.

Ioniq vs Prius – fight to the last drop

A common goal animates these four cars, that of consuming little. Let’s start with the classic hybrids, which feel great in the city, where they decelerate frequently and, as a result, there are many opportunities for energy recovery. It is fully demonstrated by both Ioniq and Prius, which achieve values ​​impossible to achieve by traditional petrol or diesel models: 3.86 l / 100 km for Korean, 4.20 l / 100 km for Japanese. But the big surprise came on the highway, where hybrids can not take advantage of decelerations and consume relatively much. 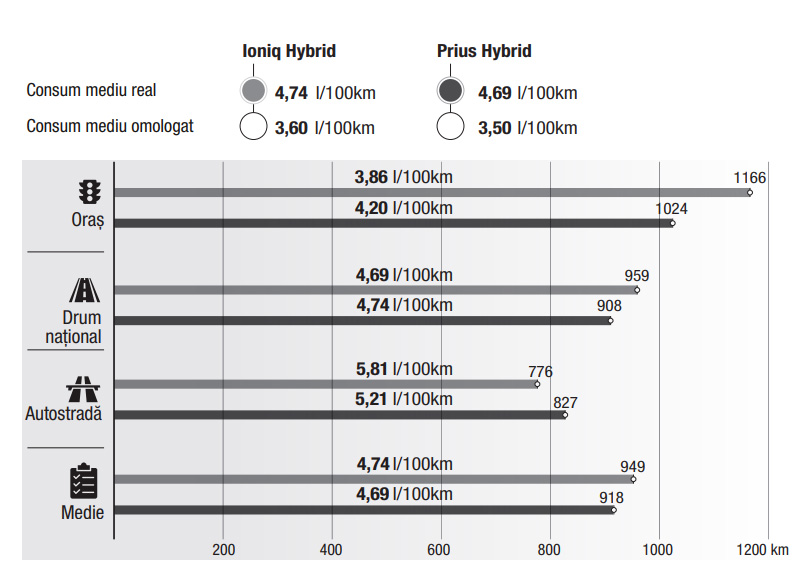 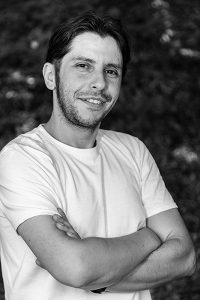 Hyundai manages to cancel the experience of two decades of the Japanese from Toyota, Ioniq being faster and feeling more sporty than the Prius, regardless of the propulsion option you opt for. In the case of hybrids, Ioniq consumes less in the city, but the Prius takes revenge on top and thicker, as it increases speed. As for plug-in hybrids, although in the city the electric autonomy is equal, once the power runs out the Prius Prime consumes less gasoline. On the national road, the Ioniq battery lasts longer, but as the distance and speed increase, the Prius Prime becomes more economical.

Roads that charge batteries on the go, close to reality

Roads that charge batteries on the go, close to reality

There are never too many electric cars: the German ordered immediately 28 Tesla Model 3

It became known that most often Ukrainians forget in a taxi