New Year’s holidays are always shrouded in magic of magic. I want to dream and believe that our wishes will come true! Of course, nothing is given just like that, and you need to work on achieving your goals. “Autocenter” has already published a series of stories by amateur racing driver Igor Romanov about the NASCAR series, now Igor tells how he got one step closer to his dream and got behind the wheel of a racing car. 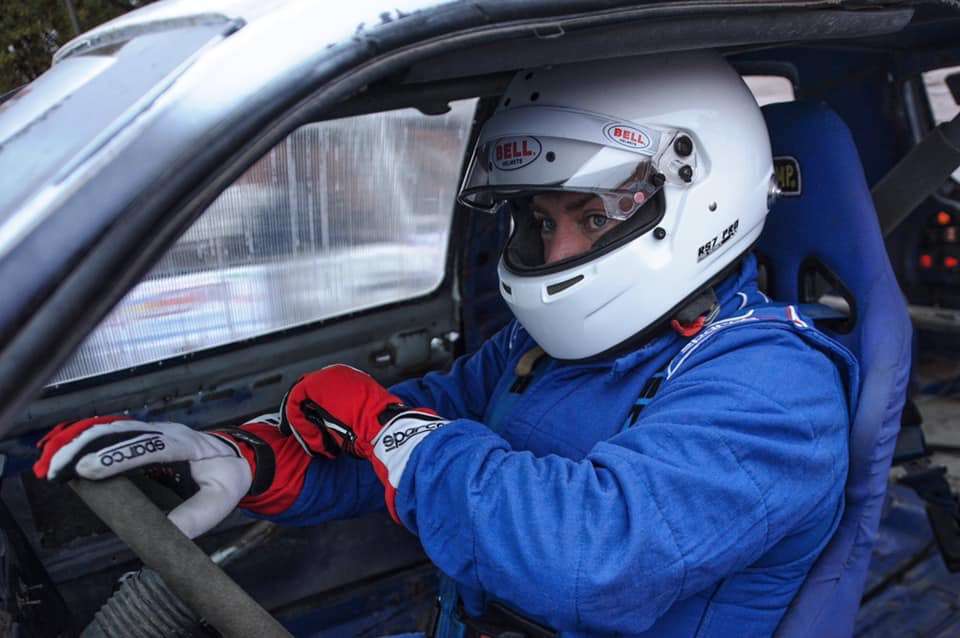 I got an interest in motor sports 25 years ago. It was in 1994, when I first saw the broadcast of the Formula 1 stage. Seen so captured me that I began to look forward to each new stage, buying newspapers with reports on the race. A friend of mine presented me with a Polish book on the history of F1 and I actually learned it by heart, literally absorbing all the facts, which were very difficult to find at that time.

Then I learned that in addition to road racing, there are many more different motorsport disciplines, such as rallies or autocross, for example. But it was the ring races at various autodromes that aroused my incredible interest and at every contact with them, made my heart beat faster. Soon it became interesting to me whether such competitions are held in Ukraine, whether there is an opportunity to see them, or maybe somehow try it myself. Why not? Since then it has become a dream, the road to which turned out to be very long and difficult.

In 1995, fate introduced me to people who subsequently played a crucial role in my motorsport (and not only) life. This is automobile journalist William Shevchuk and the famous race car driver Sergey Peleshok. I am still very proud of the fact that in my hometown of Rivne I managed to meet such incredible enthusiasts and masters of their craft. 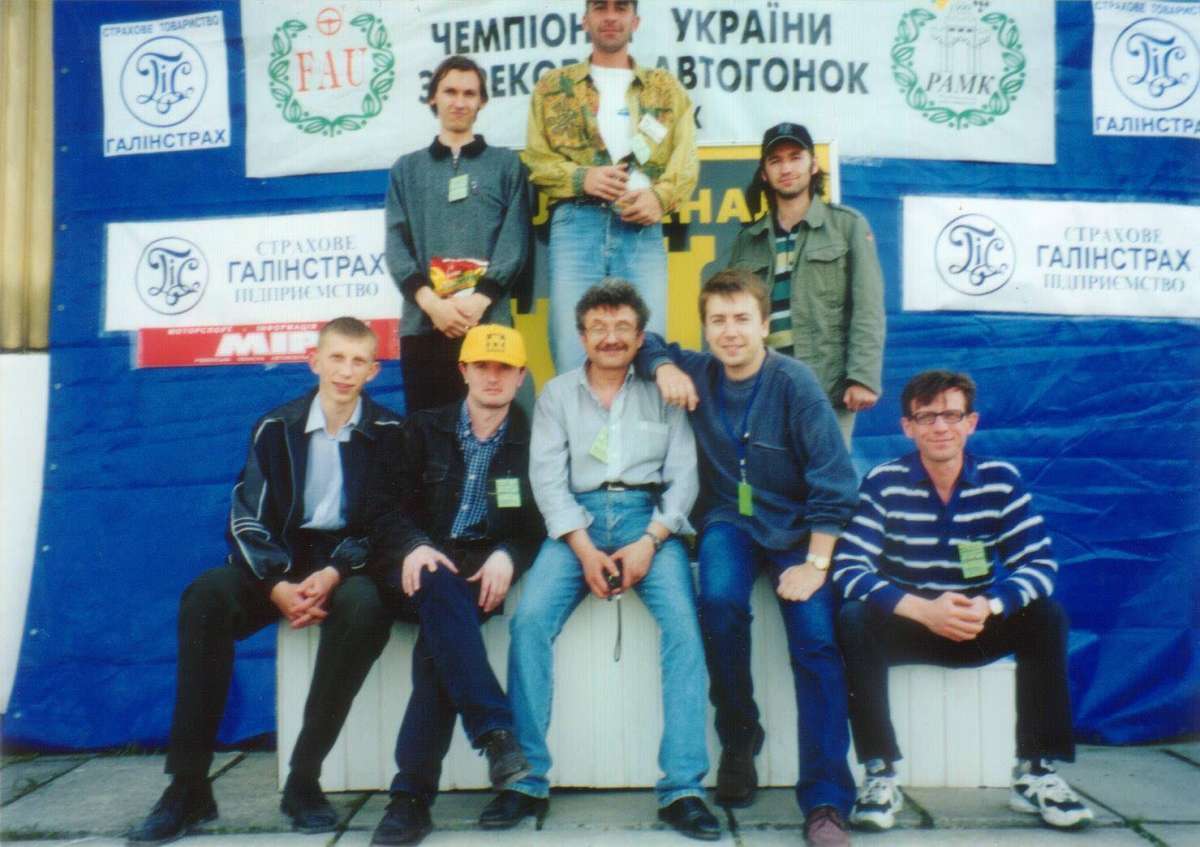 Already working as a cameraman at a local television company, I shot a lot of motor racing reports for William’s programs, and then even co-hosted one of them. William Shevchuk is an encyclopedia man; he knew everything about Formula 1. He received tons of magazines from around the world, spent days watching all kinds of automotive programs on the “satellite”. His knowledge hit me much more than what I heard from F1 commentators then. And deservedly the most famous magazines of that time, and not only Ukrainian ones, invited William as the author of articles on motorsport. Unfortunately, William has not been with us for 10 years.

In 2017, Sergey Peleshk and I were able to realize the idea of ​​holding the first Grand Prix in memory of William Shevchuk in race car racing in Rivne, and I really hope that after a pause, in 2020 we will be able to continue this initiative. I also want to say a few words about Sergey Peleshka. This is the most famous Rivne racing driver, a repeated Champion of Ukraine, and now a successful motorsport functionary who is actively developing his brainchild – the National Speedway League, to which I have a direct relationship, but more on that later.

As I already said, in the mid-90s it was much more difficult to get the necessary information than now. But perhaps the more valuable this information became for each of us, the more important the discoveries. Until May 1995, I did not know anything about American motorsport until I read a report in a newspaper about the 500-mile Indicar Formula race just concluded in Indianapolis. The journalist spoke so colorfully about the incredible atmosphere on the track and in its environs that I really wanted to see what kind of races these are outlandish, and even on some crazy oval tracks taking place! Interestingly, that race was won by the son of the legendary F1 racer Gilles Villeneuve – Jacques. Two years later, he became the World Champion in the Formula 1 class, but now he is playing in the European NASCAR series, the fighting vehicle of which I recently managed to try during tests in France. Such a curious fact. 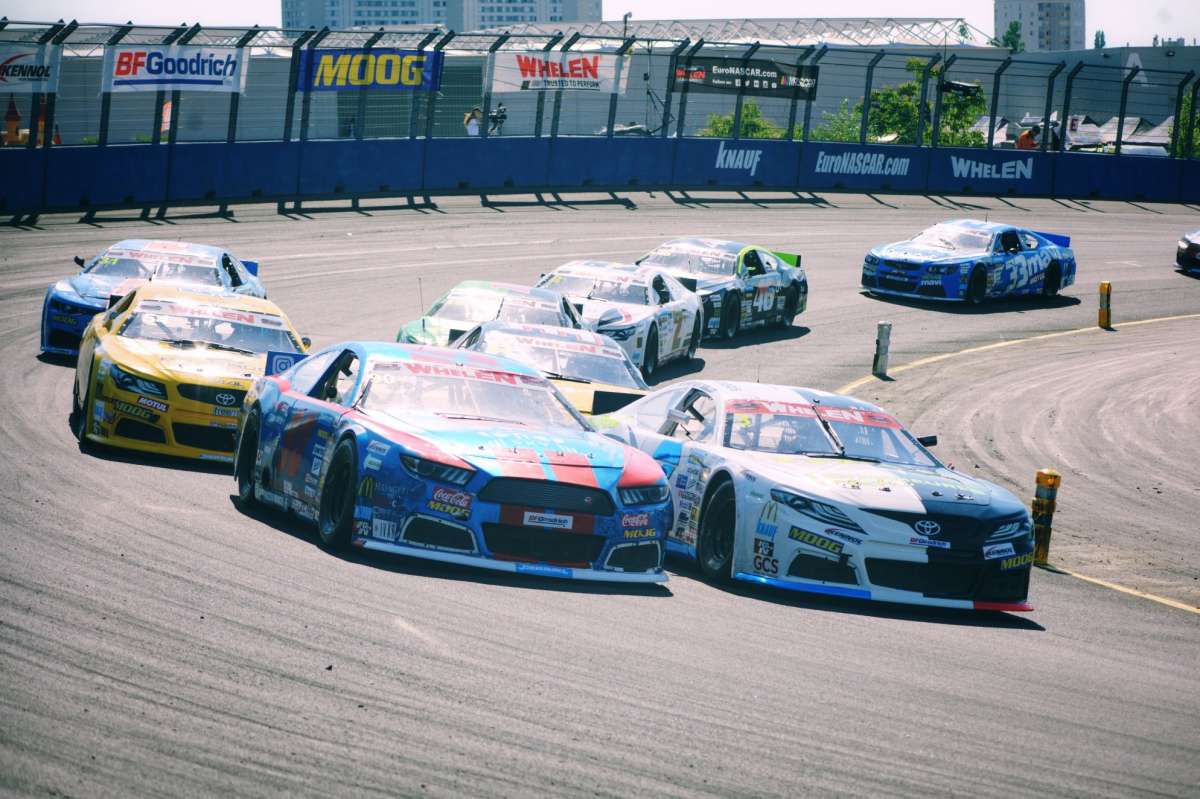 Already in 1996, the Indikar race began to regularly broadcast the Eurosport channel, and I gradually switched to Formula 1 from them. Here, the struggle was more interesting, and the routes were more diverse (not only ovals, as it turned out). In general, it was a real sight! But alas, there was an internal conflict and the division into two warring series CART and IRL. Of course, this is a serious topic for a separate conversation, but the fact is that the warring parties pulled the blanket of leadership on themselves, while losing spectator interest. 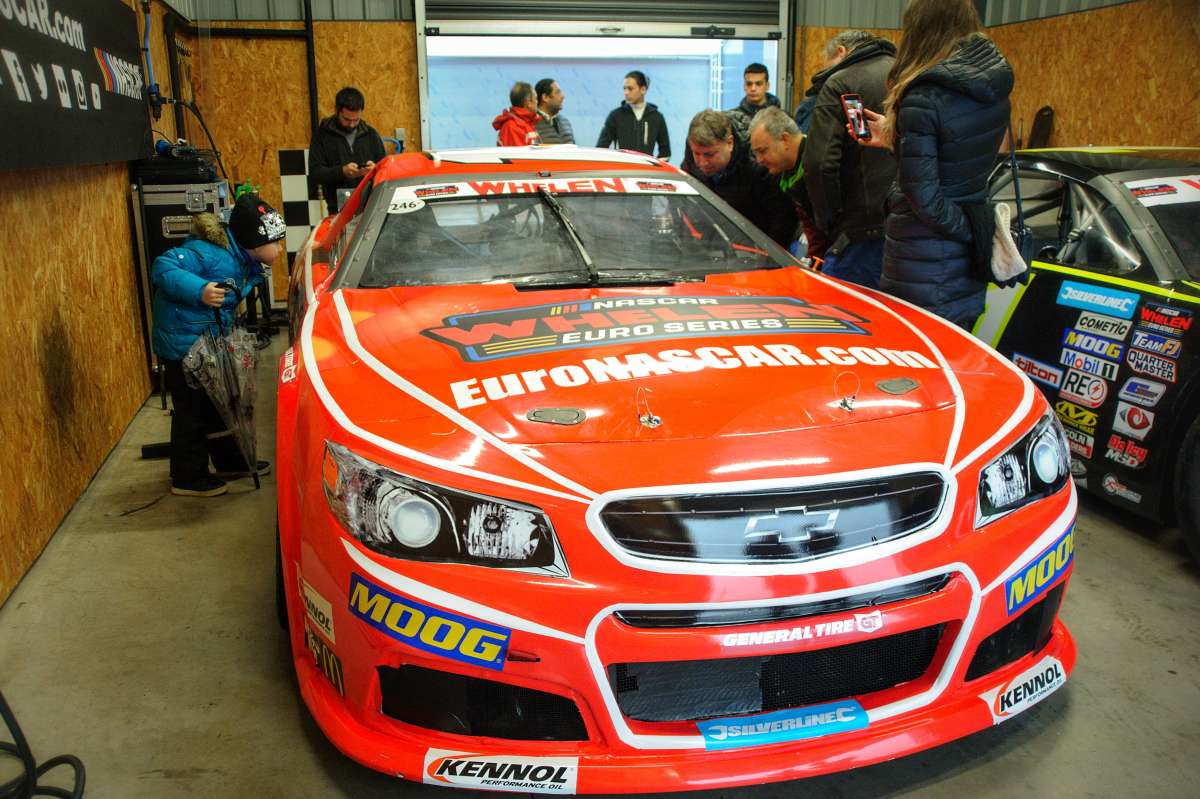 And I am very glad that in the late 90s I saw races that for all subsequent years became an integral part of my life, and probably the main dream. It was the 1999th and NASCAR bodywork championship. Since then, I try not to miss a single race and watch them at least in the recording, if it does not work out live. I also follow the younger series and foreign units. So far, I have not been able to visit any of the stages in the USA and see the race alive, but I visited two races of the NASCAR European series as a spectator-photographer and journalist.

There I was lucky to meet one of the main racing characters – Bobby Labonte (champion of the 2000 NASCAR series). I told him about my dream – to try a NASCAR car. To my surprise, it turned out that everything was more than real: there are inter-season tests for potential beginners and advised the organizers to learn more about this. 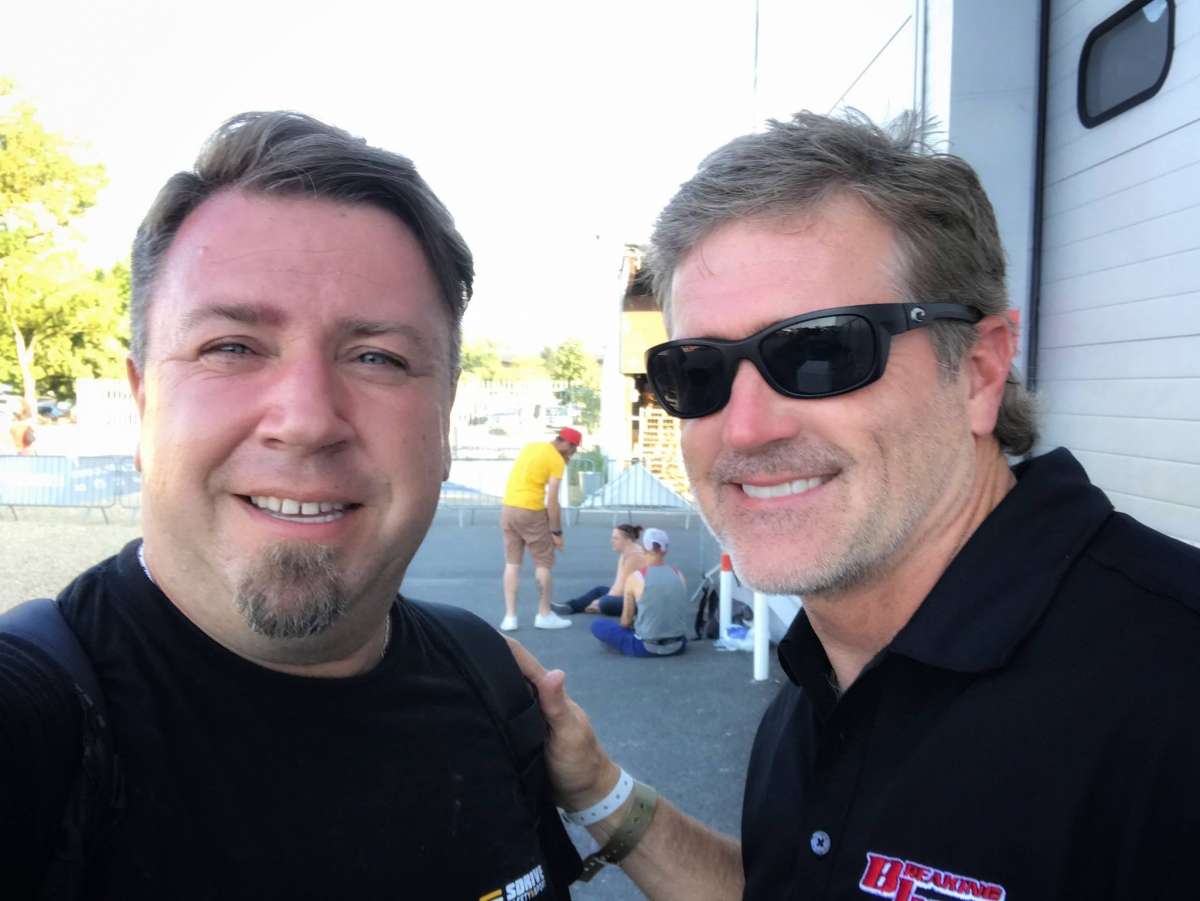 Yes, a desire arose, of course! It’s always great to raise the bar for your dreams. But in any case, I perfectly understood that in order to try such a powerful machine, I need to develop the necessary experience and skills. I submitted my racing resume and application for participation in tests for two years in a row, but did not receive an answer. This time I sent it out of habit and without much hope. A few days later I received a response that my application was accepted and the organizers confirm my participation in the tests!

In truth, my racing experience is not very big. In 2016, I took a sports training course at the Chaika Autodrom School and at the end of that year I got the opportunity to start at the stage of the Ukrainian Cup in highway-ring racing. The following season, at the invitation of Sergei Peleshka, he got into the track championship, which later became the “National Speedway League”. I am the pilot of this league now.

I’ll say that by the will of fate, it’s the track races that are probably closest to NASCAR in their format and spirit. Our tracks are oval, and the race can be called truly popular. Now, in addition to actually participating in competitions, I enter the FAA Tracking Committee, in which we are actively working on the development of discipline. Sergey Peleshok is an incredible enthusiast and I am sure that everything will work out. As for the NASCAR machine, of course, I did not have such an opportunity before. But I really wanted to try! Happened!

It may sound funny (laughs), but the hardest part was getting into the car! There are no doors in it and you have to “sit down” through the window. But in general, of course, everyone was worried about the wet surface of the track. The Fontenay-le-Comte circuit (France) is located very close to the Atlantic Ocean, and the weather here is very moody and changeable. On the eve of the tests there was a downpour, before leaving for the track it was also cloudy and the first drops of rain appeared. At a briefing, the organizers immediately warned that despite the rain sets of rubber, in the event of heavy rain, we will not be able to leave the track. I’ll say that after it was possible to overcome such a number of kilometers from Kiev, I was ready to leave even in the rain, even in the snow, even in the rain, even in slicks! At that moment when your dream is at arm’s length – no cataclysms are terrible.

The December tests were divided into two days. Each has 11 participants. Among my colleagues were Italians, French, Germans, Portuguese, and also quite famous American – Julia Landauer, who quite successfully competes in various NASCAR divisions overseas. Fortunately, the weather allowed us to go on the track. Despite all the power (under the hood here is a V8, 5.7 liters., 400 hp), the “Nazarov” car turned out to be very obedient, and the tires behaved perfectly on wet surfaces.

But in the first introductory session, I still flew into the grass … However, later I didn’t make such mistakes and got a lot of pleasure from driving! Our attempts were carefully monitored by an experienced instructor, with whom we then examined in detail all the nuances. I am pleased with how these tests passed and I am grateful to everyone who supported me while being nearby or at a distance.

After the tests, I had a short meeting with the president of the European NASCAR series, where he said that he would like to see me in the Elite Club division. This is the starting step, where you can see new horizons for your dreams. I hope that everything works out! 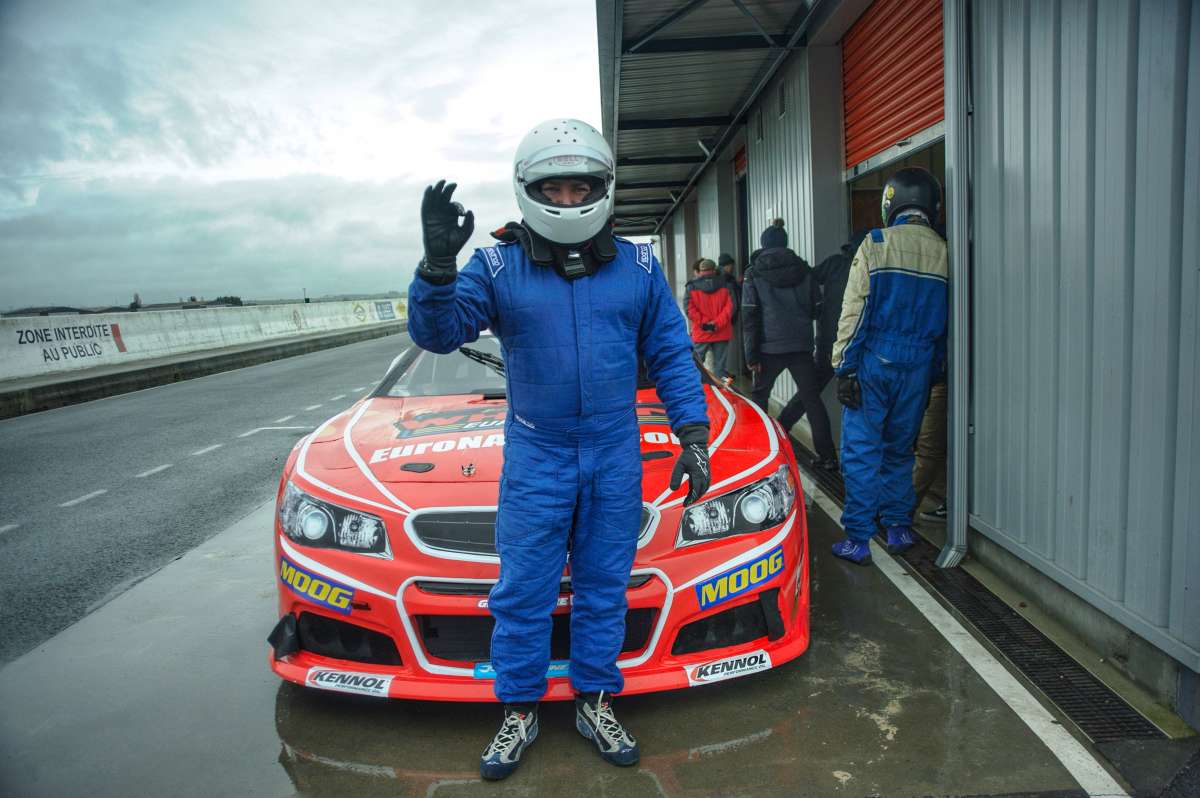 Cadillac Escalade will share the engine with Range Rover

The most capacious MAN electric bus lit up in live photos