Dakar 2020 stopped due to weather conditions

The organizers of Dakar 2020 report that the 10th stage of Harad – Shubayta was stopped at 232 kilometers due to worsening weather conditions: a strong wind rose and movement further became impossible, MAZ-SPORTauto reports on its Facebook page.

The tenth stage was to become a kind of decoration of “DAKAR”. He wore the status of “super marathon” – after the finish, participants must service their sports equipment on their own. At the same time, their teammates or even rivals can help the riders, but not the mechanics – they and the press representatives accredited from sports teams were not allowed to enter the bivouac in Shubayt. But the spare parts can be used either your own, which you need to take on board and travel with them the distance of the stage (which is overweight), or removed from cars and motorcycles of other participants. Motorcyclists and ATVs at the current DAKAR already had a similar stage, but for crews performing in various categories of cars, this is the first experience of the marathon stage in the current race. 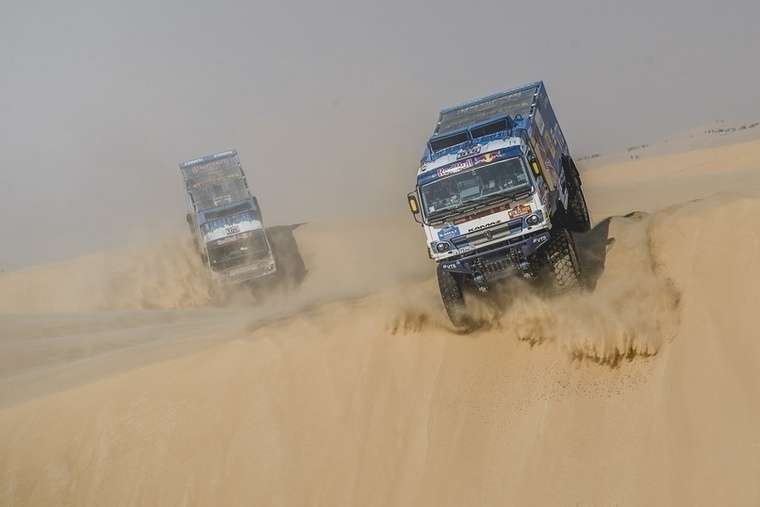 The most important role at the marathon stages is played by tactics. On the one hand, it is necessary to maintain the right pace so as not to lose to rivals. But, on the other hand, it is important to preserve the equipment to the maximum – you have to repair it yourself.
But all the plans of the participants and teams collapsed overnight – the length of the tenth special stage was seriously reduced: instead of 534 kilometers of the “combat” distance, the peloton of the participants traveled only 345 kilometers, after which absolutely all crews were sent to the bivouac in road mode.

The reason for the reduction in the distance of the stage was a dust storm that broke out in the second part of the special stage – the Rub al-Khali desert showed its steep disposition and confirmed the impassable status that it has been wearing for several centuries. This is one of the largest and hottest deserts in the world, located on the Arabian Peninsula in Saudi Arabia, Oman, Yemen and the UAE. Sand dunes up to 300 meters high, plaster plains, gravel and reddish-orange sand – very beautiful, but very difficult for riders.

The tenth special stage became a kind of stumbling block for the MAZ-SPORTaut crews. At the very beginning of the special stage on the car, the leader of the racing team Sergey Vyazovich cut the tube of the left front wheel swap system. As a result, the crew had to stop twice on the track – the first time to replace the wheel, and the second in order to drown out the tube, thereby depriving itself of the opportunity to change the pressure in one of the wheels.

Two other pilots, Alexey Vishnevsky and Alexander Vasilevsky also stopped next to Vyazovich’s car in order to help him with the repair.
After completion of the repair work, Vyazovich and Vasilevsky continued to go through the special stage together – Alexander now plays the role of a “fast technical train”, supporting two other crews in case of any problems. 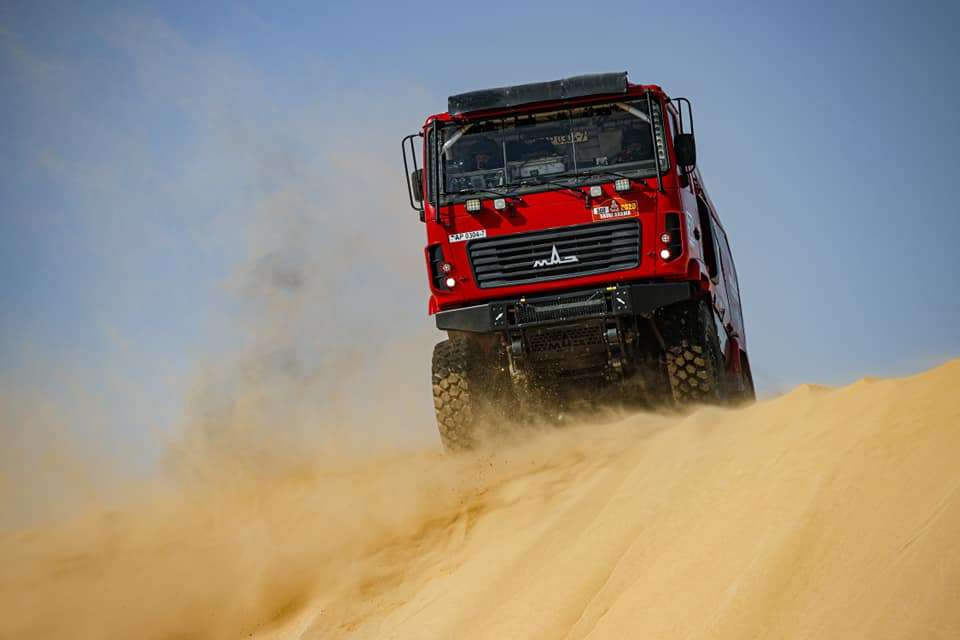 At the finish of the day, Alexey Vishnevsky showed the 11th result in 14 minutes behind the winner of the special stage. Alexander Vasilevsky finished with the 17th time, and Sergei Vyazovich became the 19th.

But the problems of the Belarusian team did not end there. On the bivouac, Vyazovich’s crew discovered a breakdown of one sheet in each of the rear springs. Now, one of the other two MAZs is to become a donor of these details.

According to the results of the tenth special stage, Andrei Karginov continues to lead the “freight” classification. 36 minutes later he is losing by the second Anton Shibalov. Sergei Vyazovich retains the third position – his lag behind the leader at the moment is 1 hour 40 minutes. 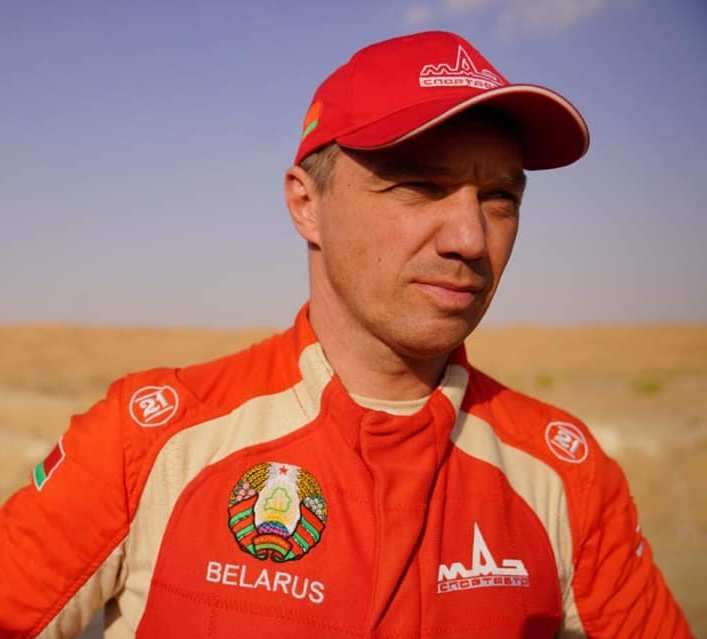 Sergey Vyazovich, head of the MAZ-SPORTauto sports team, crew pilot No. 503: “The stage was unsuccessful – literally at the tenth kilometer one of the gauges showed that our left front wheel was lowering … after a few kilometers it became clear that we were really losing air. They stopped to replace the wheel, but the pressure gauge still showed air loss. They searched for the reason – they removed the brake drum and saw that a tube was broken under it, which supplies air from the bridge to the hub and further to the rim. A stone hit or something else – but this happens once in a thousand years. This tube broke off, we just took it off and turned off the pumping tap. Thus, we ceased to be able to change the pressure in this wheel. They put a pressure of 3.5 atmospheres and drove off using swap on the other three wheels.

Sasha Vasilevsky stayed with us and was traveling on safety net. Kilometers 100 before the finish line, our car stalled. From the instruments, it was clear that the fuel pump was out of order. Fortunately, there is a backup system with an electric pump. After three or four minutes, they switched to him and drove off. Plus, at the finish line, they found that one sheet was broken on each of the rear springs. And now this is a problem: one will probably have to remove the springs from one of the guys, making their car a donor car. They will not have to go at their own pace tomorrow. ”

Alexey Vishnevsky, pilot of crew No. 528 MAZ-SPORTauto:
“The special stage has been cut by almost half today. Somewhere already at the twentieth kilometer we saw Sergei Vyazovich and stopped to find out how we could help, it took no more than six to seven minutes. But already 40 kilometers before the finish line we had problems with the brakes – we had to spend a bit of time fixing it, but, in general, the day ended without any problems. ”

Alexander Vasilevsky, pilot of crew No. 508 MAZ-SPORTauto:
“Today we drove only half the distance … I again insured the team. I don’t know my lag for today, but Sergey had breakdowns, and we stopped to help. Already arrived at the finish line together. ” 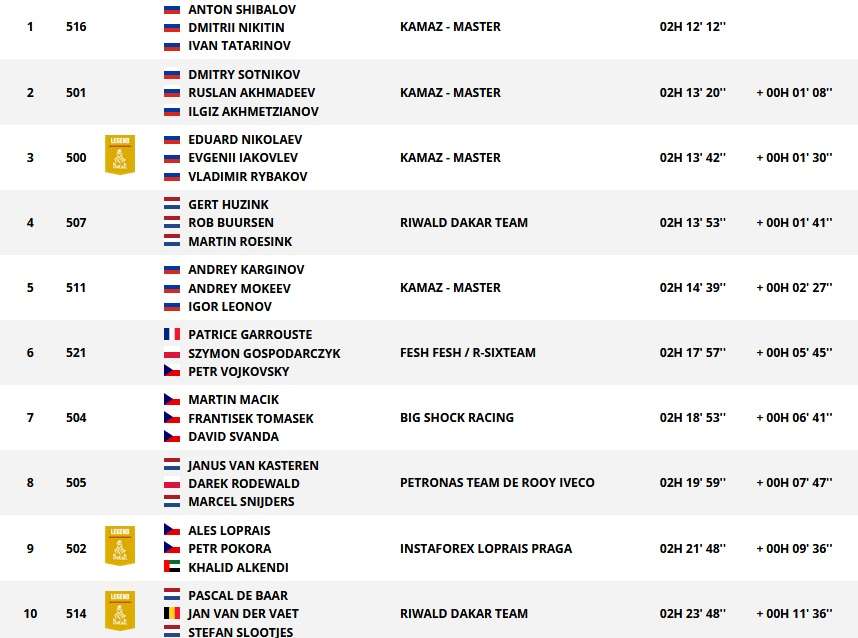 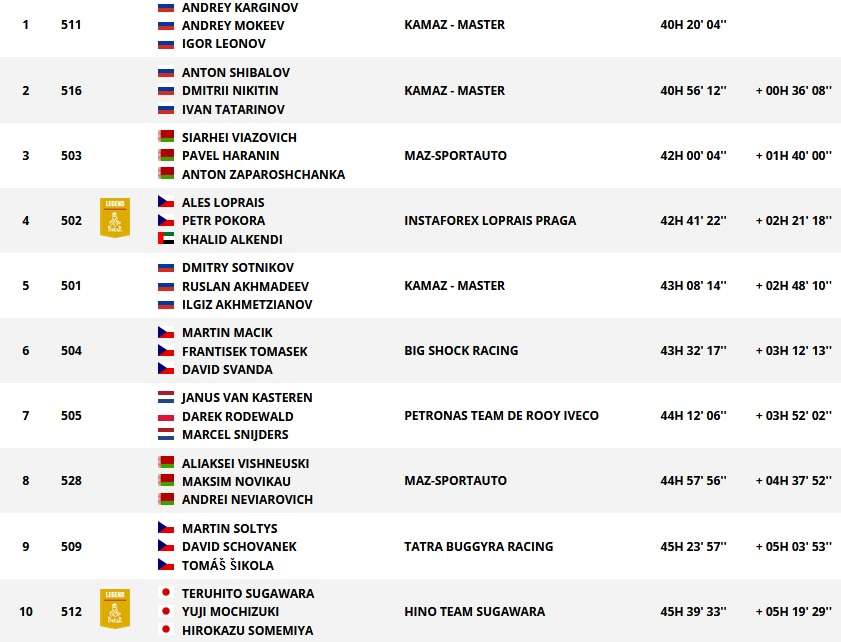 Dakar 2020 – to the finish of the rally marathon at hand